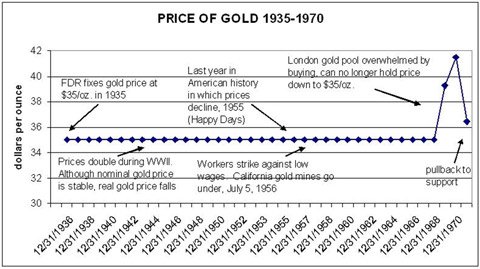 Today we stand on the threshold of one of the great moves in financial history. The signal comes as what is called a pullback to support. It will be my goal in this article to convey to you the immense power of such a formation. So simple, yet fraught with such potential for profit.

The best way to understand pullback to support is to go back in history and see where it has happened before. In this regard, we are very fortunate because the all-time greatest buy point in gold, in the summer of 1970, occurred as a pullback to support. This is depicted in the chart above. The price of gold was set at $35/oz. in 1935 (by the U.S. Government) and remained exactly the same for 32 years. Then in 1968 it broke out to the upside.

But despite this calm exterior gold was beset with powerful forces beneath the surface. When FDR set gold at $35/oz. in 1935, this was too high. Gold had been $20.67/oz in 1932, and it would have taken a general price increase of 70% among all goods to justify this price for gold. Thus the late 1930s were a profitable time for the gold mines as their product was over valued.

However, during WWII the Government closed all the gold mines for the duration of the war. The fact that the American gold standard had created the greatest economy in the world did not penetrate the minds of the â€œbrain trustâ€ of that day. Fortunately for America all other countries were more anti-gold and had worse economies. Thus American armies had better equipment/technology and with general Patton in the van rolled over the opposition.

But over the course of WWII, prices in the U.S. more than doubled. The $35 price, which had been too high, now became too low. So although the gold mines were allowed to reopen after the war, they were forced to sell their product which was now too low. They struggled along, unable to pay their workers a competitive wage through the late â€˜40s and early â€˜50s, and in 1956 there was a general strike among the workers at the California gold mines. The mines could not meet the workersâ€™ (quite reasonable) demands and were forced to close. These mines remain closed to this day.

As the (fixed) price of gold got more and more out of line with reality, the law of supply and demand came into play. At the (now very low) price of $35/oz, the gold mines had cut supply, and the world jewelry industry had increased demand. The U.S. alone could not shoulder the entire burden of suppressing the price of gold and, in 1962, recruited 9 other nations to form the London Gold Pool, which now took over the job of suppressing the price.

In 1968, the London Gold Pool was broken by the tremendous demand for gold which had built up. The price of gold shot up in what was the buying opportunity of the century.

Furthermore, it was easy to see. First, after being stable for over 30 years, when gold did break out, it broke out upside, not downside. Thus demand must have been stronger than supply. Second, the supply had been the greatest in world history. Ten nations used all their power to keep gold down and this enormous supply had been overwhelmed. Third, a little fourth grade mathematics cast a great deal of light on the situation. Gold had been $20.67 for the better part of 145 years. Since 1933, average prices in the U.S. had tripled (implying a gold price of $62/oz). Further, the political situation presaged much greater issues of paper money in the not-too-distant future. That was the time when Richard Nixon announced, â€œI am a Keynesian.â€ With both Republicans and Democrats now anti-gold, the way was clear for massive issues of paper money and a massive increase in prices. This was what in fact occurred, and it was not hard to see at the time.

However, all of the authority figures of the day denounced gold as a speculation and sneered at the idea that gold would go up in price. Most well known was the statement, at that time, by Henry Reuss, Chairman of the House Banking Committee, that gold was going to decline to $6 or $8 per ounce. These were the people who were running the country at the time, (and the people who are running it today are 10 times worse).

For this reason the fundamentalist is easier to understand, and the technician does not connect with most people, even though he is right more often. For this reason almost all brokerage houses are fundamentalist because they have to appeal to the general public and donâ€™t really care whether their customers make money (although they will never admit this).

However, my explanation of many technical formations in terms of Thomas Aquinasâ€™ theory of the fair price takes technical analysis out of the realm of pragmatism and explains why it works. Over the last millennium, there have been two famous teachers of economics, Adam Smith and Thomas Aquinas. Aquinas said that every good had a fair price and ought to trade at its fair price. But Adam Smith pointed out that Aquinasâ€™ fair price was not properly defined. Aquinas said that the fair price was that price which enabled the merchant (who sold the good) to make a living appropriate to his standing in the community.

Smith, therefore, argued that there is no such thing as a fair price, and the only price which is ethical is the price agreed upon by both buyer and seller. 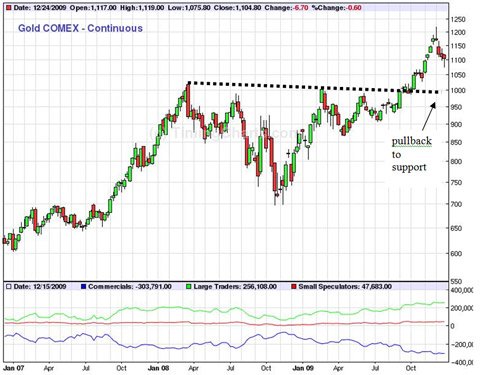 Remember, what the believer in the fair price theory says is that the price to which he is accustomed is the price which is fair. What did gold traders think in 1968-69? Gold had been $35. Now it was $40. To them, the fair price was $35, and they concluded that gold was too high. Since it was too high, it had to come down, and they sold it off to $35 again (in 1970). This is why, in defiance of the fundamentals, gold came down in 1970. A technician would say that gold had been drawn to its support level (of $35) after its breakout.

Now the good fundamentalist will reply: â€œIn the long run, the fundamentals will win out.â€ This is true, but there are two problems with it. It is very hard to get the fundamentals right. And if you do, then you can still be very wrong in the short terms. Suppose you are a brilliant fundamental analyst. You see the internet stocks on the NASDAQ going berserk in 1999. You know that, having a P:E ratio of infinity, they are very much overvalued. So you sell them short. Then they multiply by ten times, and your broker says, â€œMore margin, please.â€ There you are. Right and broke. That canâ€™t happen to a technician because he knows where to place a stop loss order. He will take losses, but he will stop them before they get too big. He will live to fight another day.

Look at the weekly gold chart of 2007-2009. Notice the resemblance to the annual chart of 1935-1970. In both cases, we have a flat line ($35 in the annual chart, $1,000 in the weekly chart). Then the market breaks to the upside and then makes a return to the line, what the technician calls a return to support. When the good moves noticeably above the line, many people regret not having bought at that level and resolve to do so if the opportunity should present itself. All these potential buyers represent what the technician calls support.

So here we are at the end of 2009, and the gold market faces the exact same situation as it did in the summer of 1970. Gold has broken out above a flat line and moved into new all-time high ground. Then it has started to pull back. We know what will happen. (The followers of) Adam Smith will win. (The followers of) Thomas Aquinas will lose. Itâ€™s been happening that way for a long, long time.

The purpose of market speculation is to beat the other guy, and in order to do that one must know what the other guy is going to do before he does it. To understand that, one must know what the other guy is thinking, or will think tomorrow. Fundamental analysis only does that in a small percentage of the cases. Technical analysis started with the question, what works? It works because it gets inside the other fellowâ€™s head and knows what he is thinking. I am not by any means an unreserved fan of technical analysis. Much of it consists of a group of intellectuals who are simply trying to show off their knowledge of mathematics and who use complicated techniques simply because they can. Fibonacciâ€™s series, for example, works when it works but is not reliable enough to give one consistent profits. But no one has ever shown that Fibonacciâ€™s series allows one to get inside the other fellowâ€™s head.

But the bottom line is that we are now close to one of the great buying opportunities of history. The big money is made in the big move. And here at the end of 2009 we are in a replay of the great buy opportunity of the summer of 1970. This is your chance of a decade.

I am the editor/publisher of the One-handed Economist, a financial letter which combines fundamental and technical analysis. I was a bug on gold in the 1970s and became a bug on gold again in late 2002. You can subscribe to OHE for the modest price of $300/year, and to do so please visit my web site, www.thegoldspeculator.com. You may also want to visit my blog, www.thegoldspeculator.blogspot.com. This weekâ€™s blog is an Open Letter to Congressman Ron Paul and Sen. Bernie Sanders on the subject of socialized medicine. It is guaranteed to get you mad (hopefully with me, not against me), and it will help give you the big picture about the world in which we live. Thank you for your interest.