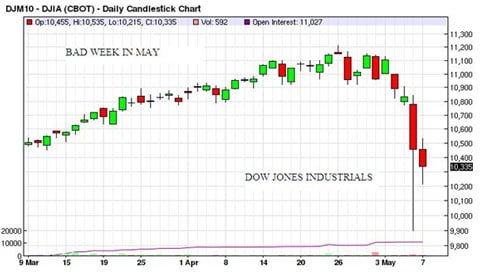 Iâ€™m a little gold bug short and stout.
Fill me up, Iâ€™ll tell you what itâ€™s all about.
Gold above 1200, smiley face.
All the world stock markets, losing face.

In Greece they are a bunch of jerks.
They cannot even conquer Turks.
When Greece had standard based on gold,
A better story then was told.

Constantinople â€“ very rich.
For paper money got the itch.
A sad, sad tale did unfold,
And now theyâ€™re running out of gold.

For some time now, although my main focus was on gold, I have run occasional articles warning against being in the stock market. To understand what is going on, we must first understand the two largest cycles in the markets. A major cycle lasts several years and is usually caused by an easing or tightening of credit. The stock bear market from January 2000 to October 2002 was a major term bear. The bull market from Oct. 2002 to Oct. 2007 was a major term bull, and the bear market from Oct. 2007 to March 2009 was a major term bear. A grand cycle is a larger move which itself is made up of several major cycle moves. The grand cycle bull move in gold of the 1970s consisted of 3 major cycle moves, bullish from 1970-1974, bearish from 1975-76 and bullish again from 1976-1980. The grand cycle bull move in stocks of the past quarter century lasted from 1982 to 2007 and consisted of 11 major bull and bear moves.

The grand cycle bull move in stocks was caused by the giant Fed easing which started in 1981 and was associated with Reaganomics. From this time, both major parties were Keynesian, and there was no significant force to tighten money and credit. This is why the bull market went on so long and so far.

The major term stock bear market of Oct. 2007 to March 2009 was caused by the Fed tightening of June 2004 to June 2006, and the major bull market of March 2009 to present was caused by the Fed easing of late 2007 to year-end 2008. Most other countries have their major bull and bear cycles in synchronization with the U.S. because their central banks follow the Fed in its policies.

We can tell that the grand cycle stock bull market was getting long in the tooth by the new century because it took a great deal of Fed easing to put the stock market up. The guide here is Ludwig von Misesâ€™ teaching that a Fed easing is, to the economy and the markets, similar to a shot of his favorite drug to an addict. It gives him a nice feeling while he is, in fact, destroying himself. He screams, â€œI want it; I want it,â€ just like the Greek protestors, when in fact it is killing him. And if you point out to him, â€œHey, you just killed three human beings,â€ his only answer is, â€œI donâ€™t care. I want it.â€

The first thing we noticed in this regard was that the very minor tightening of 1999, led to a nasty stock bear market (2000-02). To continue our drug analogy, a very small period of abstinence led to a very severe withdrawal. Then from 2000-2004, an enormous easing (the greatest to that point in time) could only get the S&P 500 back to its turn-of-the-century peak. Contrast this with the easings of the 1980s, which sent all stock indexes rocketing into new high ground.

The next tightening, 2004-06, was again a minor one, but it caused a giant bear market (Oct. 2007-Mar. 2009). This time it was Goldman Sachs and a group of Wall Street hot shots who screamed, â€œI want it.â€ And Ben Bernanke was only too happy to give it to them. He spent 2008 lowering short term interest rates to virtually zero. This easing caused the bull market which started in March 2009.

You can see the pattern. The economy is so doped up on paper money and easy credit that it gets less and less of a high from each dose. Common sense would say that sooner or later they have to stop, and then the stock markets of the U.S. and the world will have a collapse very much in the tradition of either 1929-32 or 1966-1982.

But here common sense is wrong. History tells us that there is one society where the authorities did not stop debasing the currency, the Western Roman Empire of the 4 th century A.D. They kept on creating money, and to stop prices from rising they imposed draconian price controls (enforced by crucifixion).

All the businessmen in the Empire went out of business. All the stores closed, and it was impossible to buy anything. IF YOU WANTED ANY ECONOMIC GOOD, YOU HAD TO MAKE IT FOR YOURSELF. This is what is called a barter system, and all peoples at all times and places who have based their economies on barter have one thing in common. They are dirt, stinking poor.

In the early 4 th century, Rome converted from a money economy (which had originally been silver) to barter. Her armies, now poor, could not afford metal armor and could no longer defeat the barbarians. The population of Mediterranean Europe (Iberia, Italy, the Balkans and Greece) fell from 19 million in 200 AD to 10 million in 800 AD. (See, Atlas of World Population History by Colin McEvedy and Richard Jones (Facts On File, New York), p. 28.) The specific causes were: famine, brigandage, plague and war. The larger cause was the abandonment of money. This is the longest and deepest population decline in European history for which we have records.

Either Ben Bernanke will choose to follow Rome and destroy his society, or he will stop the currency debasement before it gets to that point. Here your guess is as good as mine. If he stops it, the stock market will probably return (in real terms) to its 1982 level.

To have a serious major term bear market, Bernanke will have to tighten, and that has not yet happened. But it often occurs that, toward the late stages of a stock bull market, shortly before the top, there is a sudden, sharp drop. This is a warning (which is easier to see in retrospect). Stock bulls: you have been warned. If the tightening now comes, I will predict a vicious major term stock bear market. This is one of the reasons that I am a gold bug at this stage of history. This stock market is wildly overvalued, and any number of small events can injure it badly. I donâ€™t like to play those games. I keep the probability on my side. In the long run, that is what pays off.

The last two weeks is a very good example of why I have been warning people away from stocks. The economic establishment in this country is incredibly stupid. Their argument today is exactly the same as when I entered the markets in the 1960s. â€œThe stock market always goes up. Buy good, sound stocks for the long pull.â€ At that time, I became one of the very early gold bugs, and together we beat the pants off of the establishment as gold went to $875. THE ESTABLISHMENT STOCK BUGS OF THAT DAY HAD A PERFECT ANSWER. â€œIf we pretend it never happened, then it didnâ€™t happen. If we pretend that gold did not go up, then it didnâ€™t go up.â€ It was as though, when Galileo dropped the two weights from the Leaning Tower, thus proving that the heavy weight hit the ground at the same time as the light, all the establishment physicists witnessing the event simultaneously said, â€œIt never happened. Since we are the experts in physics, who would believe Galileo?â€ Of course, in such a society the great advances which occurred over the next few centuries in science would have never occurred, and you and I would live today much as folks lived in the 16 th century. The question you must decide is do you want to get your economic guidance (with your own money at stake) from people like this?

Under a free market system (based on sound money), the stock market moves sideways. Charles Dow invented the Dow Jones Industrials in 1896, but he was keeping railroad indexes back to 1885. His first 47 years of indexes (1885-1932) show that the stock market moved sideways (exactly as theory predicts in a free market). When FDR abolished the gold standard in 1933, he made it possible for the Federal Reserve to lower interest rates below the free market. As rates went down, stock yields had to go down with them, and this of course, pushed stock prices up. That is, the New Deal did not rob from the rich to give to the poor; it robbed from the working man (who had to pay higher prices for goods) to increase stock prices and corporate profits.

The Dow Jones Industrials were 41 in 1932. Since the Consumer Price Index has multiplied by a factor of 17 since that date, the value of the DJI should be 41 times 17 = 697. So if the U.S. Government ever stops its policy of robbing from the poor to give to the rich, then you can expect the DJI to go down to about 700 in short order. I am not saying that this is imminent, but if a new political party comes to power based on the principle that robbery is wrong, then bear in mind that current stock prices are enormously overvalued. (Actually, I believe that there was such a party some time back. Its platform was very short, and I believe that it was written on stone tablets. But that may just be a rumor.)

Focusing on the grand cycle trends puts the emphasis where it belongs. It shows us that the economy is in the grip of giant forces, and these forces can only be understood as they unfold â€“ which is very slowly.

For example, nominal interest rates have been declining for 29 years. Common sense tells us that real interest rates are now below zero on the short end. This is because long rates cannot fall below 4% even as short have fallen to almost zero. So 4% nominal long rates must be 0% real, and the bond marketâ€™s estimate of the rate at which prices are rising must be 4%. 0% real rates are a very hard barrier to scale because this means that one is lending for free.

At 0% real interest rates virtually no one will lend, and almost everyone wants to borrow. The free market never creates 0% real interest, and when the Fed forces this unnatural condition upon us, the economy is wildly distorted. The last such distortion was the housing bubble of 1997-2006, and that was caused by Greenspanâ€™s lowering of short rates to 1%. Bernanke is going him one better.

The name of my fortnightly (every two weeks) newsletter is the One-handed Economist ($300 per year). We make predictions with a view to the long term forces which the Government has unleashed upon the economy. You can subscribe either by going to our website, www.thegoldspeculator.com and clicking on the Pay Pal button. Or you may send $290 ($10 cash discount) to: The One-handed Economist, 614 Nashua St., Milford, N.H. 03055. Now, as gold approaches its Dec. 3 high, we will be debating whether to step back or to remain aggressively bullish. Much is riding on the answer.