This past weekend the Group of 20 nations met to discuss the value of their currencies. These discussions are being called â€œwarsâ€ in the general media because, although there is no actual shooting or dropping of bombs, each nation approached them with the attitude appropriate to a war. â€œIâ€™m going to get mine at the expense of my neighbor.â€ To sum up the positions of all the nations at the talks:

Nation 1: â€œI want my currency to be lower than your currency.â€

Nation 2: â€œNo, I want my currency to be lower than your currency.â€

Hey, wait a minute Mr. Geithner, werenâ€™t you talking, just a minute ago, about love and good will toward all men? Itâ€™s only the political right which engages in hate. Arenâ€™t you all men of the left? Arenâ€™t you for love and peace? Then how could you have come into a field as benign and harmonious as economics and turned it into a war? After all, Adam Smith showed us that everything in economics operates by a harmony of self interest.

Something else which is difficult to understand is all this going up and going down of currencies. Here in the United States the dollar is defined in law as 25.8 grains of gold 9/10 fine (about 1/20 oz.). Of course, the current government of the United States does not obey the law. The Constitutional Convention of 1787 voted 9 states to 2 (in mid-August) that paper money (discussed under the guise of bills of credit) could not be a legal tender for payment of debts, leaving gold and silver as the only legal monies possible in the country.

Therefore, all of these â€œmoney warsâ€ (by people who loudly proclaim their devotion to peace) are pretty much nonsense. As long as current day governments ignore the law and make it their business to steal rather than to protect property rights, the world will get poorer.

In this poorer and poorer world, the world governments will rob from the poor and give to the rich. That has been their modus operandi since March 9, 1933 when Franklin Delano Roosevelt gave the privilege to counterfeit to the nationâ€™s commercial banks. At that time there were 20 billion dollars in the U.S. At the present time, there are (an estimated) 4 trillion dollars in the U.S. money supply. (It is impossible to know for sure because the Federal Reserve is lying about the nationâ€™s money supply.)

But some things we can know pretty well. No-one in the G-20 seems to have noticed, but commodities are creeping up. Gold has been leading the way, of course, and recently silver has caught fire and appears determined to catch up. Corn and soybeans are starting to move aggressively. Cotton recently hit an all-time high.

What we are seeing now are the price moves being caused by the money which was printed in late 2008. With the new QE2 easing now proclaimed by the Fed over the coming 6 months, this will extend the total money printed to approximately a triple. However, we cannot simply multiply the CRB by a factor of 3. The paper aristocracy, in order to bring about the current â€œinflation,â€ scared the dickens out of the American people by falsely forecasting â€œdeflation.â€ 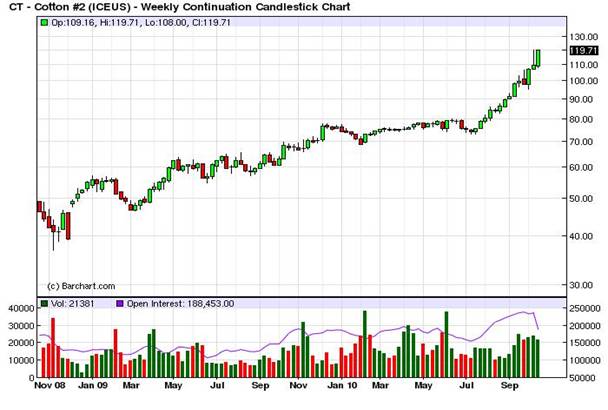 Therefore, a false bottom was created in commodities in December 2008 (a little above 300), and this represents an extremely undervalued position for the CRB. Figuring from this bottom, therefore, the CRB will go up by far more than a triple.

So when Tim Gaithner tries to steal from the American people to enrich the paper aristocracy, followers of the One-handed Economist know exactly how to handle the situation. First they scare by public by a completely fictitious story of a coming deflation. But even while they are telling this lie, they are printing up the money for the â€œinflation.â€

WHAT YOU NEED TO DO IS TO BUY THE PRECIOUS METALS MARKETS LIKE CRAZY. He who hesitates is last. This pattern has repeated over and over in history. The paper aristocracy creates a lie to the effect that prices are going down. The original lie was that of the Great Depression, which was actually a period of great prosperity for the vast majority of the American people. That lie was so successful that it was elaborated over and over. Each time the vast majority of the public fell for it and took actions appropriate if prices were going down. But, lo and behold, prices began to rise, and the believers in the media lost their shirts. Finally the trend of rising prices became a tidal wave, and at this date there has not been a single year in which the Consumer Price Index has fallen since 1955. Isnâ€™t it interesting that this, the last year in American history when prices have actually declined, is fondly remembered by the American people as â€œHappy Days?â€ And, of course, it is well known that the entire period of the 1950s were a time of largely flat prices. With stable prices, you could make it, or fail, on your own ability. The hard working and competent succeeded; the lazy and incompetent fell by the wayside.

Of course, the paper aristocracy tries to perpetrate the myth that falling prices are bad for an economy. Unfortunately, the American people do not agree. The last time prices fell in America, the American people, and not any phony economist, called it â€œHappy Days.â€ 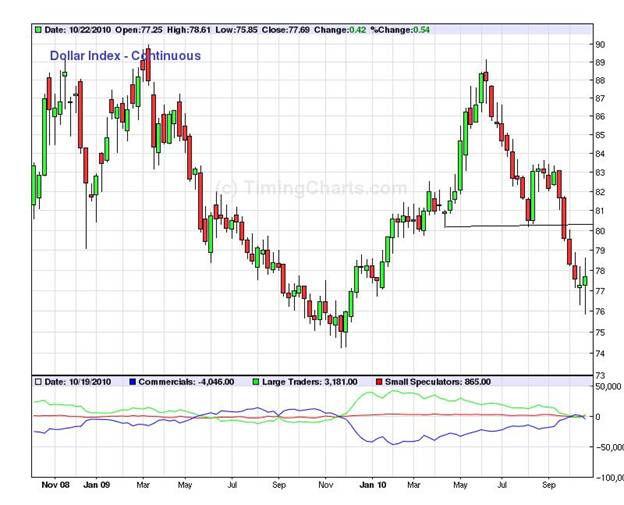 Just to provide some context, a study of the Wholesale Price Index for the United States from 1793 to 1933 shows, net, no change in prices, and during this time the U.S. grew to be the wealthiest country in the world. For much of this period (up to the 1870s), there was not even a word for unemployment because the phenomenon did not exist. This was true in spite of the fact that through most of this period people from all over the world poured into the U.S. in large numbers, many of them working for very low wages and displacing Americans from their jobs. A good example would be the year 1906, in which immigration was completely unrestricted and unemployment was 0.8% (according to Historical Statistics of the United States, Colonial Times to 1954, published by the Commerce Department). That is, unemployment today is more than 10 times what it was for the year 1906!)

Changed? Can economic data be changed? Isnâ€™t economic data what it is? When we look at a book of economic statistics, canâ€™t we assume that what we see there are the facts? Actually, when data is first released, it is preliminary. Then, perhaps a few months later, it is revised. And perhaps a year or two later there is a second or third revision. But after 2-4 years, the data is considered as good as it can get, and the people who keep that statistic do not make any more changes.

So why was the unemployment rate for 1906 changed some 50 years after its â€œfinalâ€ revision? The answer is painfully obvious. The real 1906 rate was out of sync with modern theories of economics. No modern economic advisor to a President can get anywhere near that rate: virtually no unemployment, virtually no increase in prices and the greatest economy in the history of the world.

You have probably read George Orwellâ€™s book 1984, in which Big Brother is continually making up lies to deceive the population. There would be a major propaganda speech by the government, and the next day certain books would disappear from the libraries and be replaced by new books with different facts. â€œOceana is at war with Eastasia. Oceana has always been at war with Eastasia.â€

In other words, dear people, we are already living in the world of 1984, and the government is continually changing the basic data upon which everyone relies for their facts.

So remember, when the Government of the United States starts to make â€œwarâ€ against its fellows in the establishment, we are in a competition to see which country can depreciate its currency most rapidly. The only winner in that kind of competition is the speculator who positions himself in gold.

Will gold continue last weekâ€™s down move? Will silver recover? Is the traditional autumn gold and silver rally over? I will discuss these questions in the next issue of the One-handed Economist (Oct. 29, 2010). The One-handed Economist ($300 per year) is my fortnightly economic letter. It makes forecasts on the financial markets based on technical analysis, Austrian theory economics and my theory of the commodity pendulum. You may subscribe by going to my web site, www.thegoldspeculator.com and pressing the Pay Pal button, or you may subscribe by sending a check for $290 ($10 cash discount) to: The One-handed Economist, 614 Nashua St. #122, Milford, N.H. 03055.