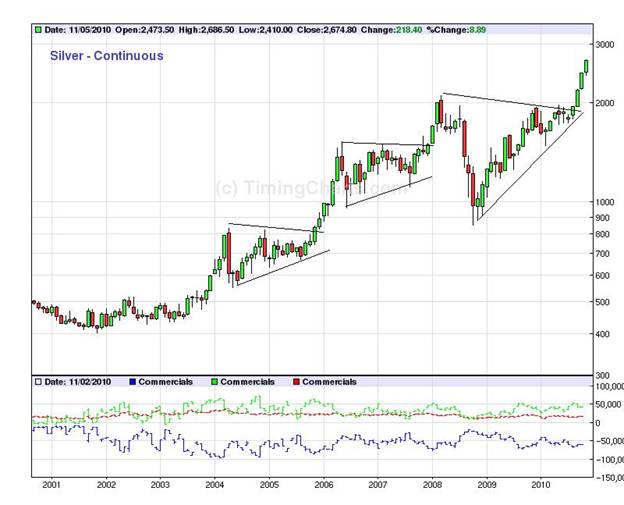 Above is a chart of the price of silver over the past 10 years showing the move from $4/oz. to $26/oz. We call to the attention of Ben Bernanke that silver has been going up. Prices going up are not â€œdeflation.â€

â€œThe U.S. central bankâ€™s decision to buy $600 billion of government debt has drawn scathing comments from a host of nations who contend it is generating global instability by ramping up their currencies against the dollar, inflating asset bubbles ;and stoking inflation in their economies.

â€œFederal Reserve Chairman Ben Bernanke on Friday defended the U.S. central bankâ€™s bond-buying against beggar-thy-neighbor criticism, saying it was â€˜criticalâ€™ for global stability that the U.S. economy regain its strength.

â€œDoing so, he suggested, would bolster a dollar whose weakness has sparked cries of foul from Bogota to Beijing.â€

America is in very big trouble because the inmates are in charge of the asylum. Bernanke, for example, thinks that he is boosting the U.S. economy.

How is it possible to improve the nationâ€™s economy by counterfeiting money?

Members of the paper aristocracy measure the nationâ€™s economy by a statistic called Gross Domestic Product. Gross Domestic Product was invented in the 1930s by a Russian national who worked his way into the New Deal and devised the formula for GDP. He presented this without proof that it actually worked and measured the real economy. Hardly any American can pronounce his name.

For example, if a man invents a thermometer, he is obliged to show that it actually does measure the real temperature. If he takes it outside in January and it measures hot and in July measures cold, then his thermometer does not work, and he is a failure.

This is the case with GDP. For example, a very poor period in the American economy was the early 1940s. This should not be a surprise because the world was at war, and everyone was engaged in the destruction of goods. One could not buy a new house in the early 1940s because none were being built. One could not buy a car for the same reason. Gasoline was rationed to 3 gallons a week. Butter and many food items were also rationed. You would walk into a store and find that it did not have the item you wanted to buy. But real GDP rose sharply during this time. This is the thermometer which reads hot in January.

We can contrast this with the period of the 1930s. Here are the facts. Virtually everyone saved in America at that time (because the Fed had not yet lowered interest rates to 0), and from 1930-33 the real value of the average personâ€™s savings rose by 30%. People were thus able to live off the increase in value of their savings, and this is part of the reason that unemployment was high. (The other part is that real wages were high.) People had the resources to hold out for a better job. From 1929 to 1934, annual per capita consumption of meat rose from 129 lbs per person to 144 lbs per person. (Historical Statistics of the United States, Colonial Times to 1970, Dept. of Commerce, series G881, p. 330.) People switched from margarine to butter, and they gave more to charity. This is the period called the Great Depression by the paper aristocracy to deceive the American people into thinking that they were poor. In reality, during the early 1930s the paper aristocracy took it on the chin. Their stocks went down. The real wages they had to pay went up, and they were hurting badly. But it would not have played well in the media for rich bankers and Wall Streeters to complain that they were poor. They had been making money hand-over-fist during WWI and in the 1920s. Now they were giving some of that back, and they knew that the country would not be sympathetic to their plight. So they could not say, â€œWe bankers and Wall Streeters are hurting. Feel sorry for us.â€ Instead they said, â€œThe whole country is hurting.â€ That was the lie of the Great Depression. The period of the early 1930s was one of the best (economic) times in American history, and the paper aristocracy did not want you to know that. This was part of the motivation for the invention of GDP as it provided an argument for saying that the country was poor in the early 1930s.

In words of one syllable, almost everything you have been taught is a lie, and almost every prediction made in the countryâ€™s newspapers proves false.

Bond buying by the Federal Reserve is accomplished by the Fed printing paper money and using it to buy U.S. Treasury bonds. The Fed does not create any wealth on its own. It does not receive tax money. It has no source of money except counterfeiting. This is illegal because the Constitution of the United States bans paper money (as was decided at the Constitutional Convention in mid-August 1787) and only allows gold and silver coin to be legal tender. This means that Ben Bernanke and his fellow members of the Federal Reserve Open Market Committee are criminals, and their crime consists of robbing from the poor and average American and giving to the bankers and Wall Street. 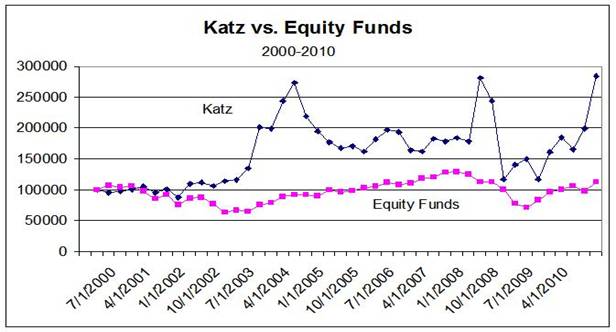 To get away with this crime, the economists of the paper aristocracy tell a series of lies, but Bernankeâ€™s is a whopper:

â€œDoing so, he suggested, would bolster a dollar whose weakness has sparked cries of foul from Bogota to Beijing.â€

What Bernanke is saying is that bond buying by the Fed would bolster the U.S. dollar. In other words, if the Fed counterfeits dollars out of nothing, the dollar will go up.

All right, Mr. Bernanke. Do you want to bet?

Myself and my subscribers have been betting against you for the past decade. The chart above shows a comparison of my Model Conservative Portfolio with U.S. Diversified Equity Funds (the countryâ€™s average mutual fund). This past week the Katz Model Conservative Portfolio raced to a new high at $284,846, up 184% (past 11 years), as compared with Equity Funds, which were up 13%. We, however, have an unfair advantage. We know economics.

And this is the good news for commodity speculators. Bernanke may be destroying America, but he is giving us (literally) a golden opportunity. He thinks that by printing money he is creating real wealth and that this additional wealth will prevent a rise in prices. I have heard this theory again and again and again. IT HAS NEVER WORKED. The problem with Ben Bernanke is that HE HAS NO COMMON SENSE.

Any human being can be wrong. But it takes a certain type of stupidity to be wrong, ignore the fact that one is wrong and REPEAT THE SAME MISTAKE OVER AND OVER. After QE2 has been completed, the U.S. money supply will have tripled since mid-2008 (although the current day Fed is lying about the money supply, counting demand deposits as time deposits). The Fedâ€™s expansion of Federal Reserve credit is taking longer than normal to get into the money supply, but this is a small matter. Already commodities have begun their rise, and they have a long way to go. The rise in commodities will pass through into producer prices, and that will pass through into consumer prices. My guess is that by 2-3 years prices in America will be well on their way to a triple (from current levels).

Bernankeâ€™s essential characteristic is that he gets a theoretical idea in his head, and when it proves false, he absolutely refuses to admit it. As consumer prices in America go to the moon, he will make excuse after excuse to deny this fact and refuse to admit reality. This means that the moves in the precious metals (and other commodities) are going to be astounding. This is your opportunity. The train is leaving the station. GET ON BOARD.

The One-handed Economist is my fortnightly newsletter which predicts the financial markets, with special emphasis on silver and gold. It is written fortnightly (every other Friday) and mailed the next day. You may subscribe by visiting my web site, www.thegoldspeculator.com and pressing the Pay Pal button ($300) or by sending $290 ($10 cash discount) via U.S. mail to: The One-handed Economist, 614 Nashua St. #122, Milford, N.H. 03055.

And thanks to Ben Bernanke for helping us to make all this money.