Being gold bugâ€™s lots of fun.
Weâ€™ve got the bad guys on the run.
The autumn season does behoove
For price of gold to make its move. 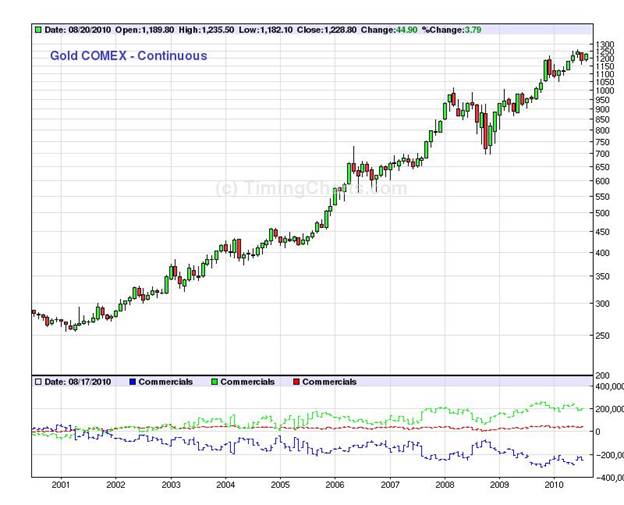 Above we have the monthly basis price of gold (www.timingcharts.com) for the past 10 years. For the past 10 years, there has been a pronounced advance through the autumn, usually into the winter and sometimes lasting until May. Gold usually hits a bottom in July and then makes a secondary test in August. Then in late August it starts to rally and after Labor Day begins a steady advance. The up move in early August is unusual and is probably a hint that this yearâ€™s autumn rally will be stronger than usual.

Going back to the early part of the decade we find similar bullish autumn moves in 2001, 2002, 2003 and 2004. They are smaller in absolute numbers, but the semi-log chart tells the truth and proves that these moves were very close in percent gain to the ones later in the decade.

I believe that the 2008 decline was a unique situation. I knew that the New York Times was powerful, but even I underestimated their ability to move markets. And in 2008 they pulled out all the stops. They started to scream â€œFINANCIAL CRISIS,â€ and they kept repeating similar headlines through the last 2 weeks of September.

The two biggest headlines in the New York Times over the course of the 20 th century were Pearl Harbor and the landing of men on the moon. The â€œfinancial crisisâ€ of 2008 was only slightly behind these two in size of headline and quantity of space. And it surpassed them in frequency of repetition. Both Pearl Harbor and the moon landing only happened once. But the â€œfinancial crisisâ€ of 2008, not being a real event, could be strung out and reported over and over. (If I have a good sense of the world â€“ and my record shows that I do â€“ then I would not be at all surprised to learn that the New York Times was maneuvering behind the scenes at that time to get the Japanese to attack a second time so that there could be another headline.)

Who benefited from the housing bubble of 1997-2006? It was housing speculators. Young couples searching for their first homes were priced out of the market. People were buying houses, not to live in them but to â€œflipâ€ them, meaning sell to a greater fool, who also would not live in them. Housing affordability collapsed.

Around World War I, major advances were made in homebuilding techniques, and houses were built much more cheaply and were much more affordable. The people of the day had the brains to realize that this was a good thing. You could buy more house for your money, or you could have more money left over after you made the purchase. Todayâ€™s media treats a decline in prices as something bad. They say, â€œthere is a threat of deflation.â€

Well, if a decline in prices is bad, then how come 1955, the last year in American history to see a decline in prices, is called â€œHappy Days.â€ It must be that the average American knows more about economics than all these fancy idiots running around with big titles. Or, try the following experiment. Go into a small town in America, sit down in a local eating place and strike up a conversation. â€œHey, remember two years ago when gas prices dropped from $4.00 to $1.50? Was that a good thing or bad?â€

â€œWhat, are you kidding fellow? My gas bill for the quarter was down. My heating bill was down. The family could go out for a drive without worrying about spending too much money. The money was flowing from the oil companies and the Saudis into my pocket. I wish those days would come back.â€

As I have noted previously in these pages, there was a much bigger decline in prices in the late 19 th century (1866-1896). A succession of geniuses (Edison, Tesla, Bell, etc.) invented wonderful new products which made American life the envy of the world. Real wages rose by 90% in real terms. Immigrants flooded into the country to become part of America. And the country became the number one economic powerhouse in the world.

And yet the New York Times is telling us that in 2008 a financial crisis began. Well, Mr. Sulzberger, why donâ€™t you get your own house in order before you tell anyone else what to do? You took all your money around 2000 and used it to buy your own stock for $40 per share. By 2009, it was down to $4 per share. That is, you lost 90% of your money. During the same period gold bugs multiplied their money by almost 4 times. Now that was a financial crisis â€“ for you â€“ precisely because you took your own advice.

â€œEarly retirement is no longer the goal of most workers. Even retirement at age 65 seems unattainable to many people. The majority of Americans now expect to work until age 65 or later.

The number of Americans planning to retire before age 65 has dropped from 50% in 1996 to 29%, according to a Gallup survey of 1,020 adults. Meanwhile the proportion of people planning to work until after age 65 has increased from 15% in 1996 to 34%. This is the first time in the 15-year-old survey that more workers plan to retire after age 65 than before it. Another 27% plan to retire exactly at age 65.â€

I have repeatedly commented in these pages that retirement had become impossible in America in principle. It takes some time for a principle to be actualized in reality, but gradually fewer and fewer people are making the decision to retire. The US News & World Report article makes it clear that we have passed the half way mark toward the society where retirement is impossible for most people.

The reason is simple. To retire, your savings must grow, and the traditional way of doing this was by compound interest. But when the New Deal abolished the gold standard, it started to print paper money at a rate just about equal to the rate of interest. This, of course, means that you have been getting 0 real interest rate for the past 77 years. But at 0% interest money cannot grow, and this means that you cannot accumulate money for retirement.

Americans have responded by trying to make money for retirement by speculating in stocks. This is like making up for a cut in pay by beating your buddies in the Saturday night poker game. Speculating is a zero-sum game. Some may win, but an equal amount must be lost.

The myth is perpetrated today that the stock market always goes up. The stock market has gone up since 1933, but this has happened because the Fed stole money from bond (and other fixed income) investors to give it to stock speculators. FOR EVERYONE TO BENEFIT, NET WEALTH MUST BE CREATED. That is a point that the â€œBrain Trustâ€ did not understand.

Do you want to speculate in the stock market intelligently? Then watch the Fed. When the Fed eases credit and prints money, then stocks will go up (and bondholders will lose via the depreciation of the currency). When we are on the upswing of the commodity pendulum (as now), then be in gold or other commodities. When we are on the downswing of the pendulum, then be in stocks (or real estate). That is, in broad scope, the name of the game.

The specifics to implement this strategy are discussed fortnightly (every two weeks) in the One-handed Economist. ($300 per year). You may subscribe by visiting my web site at www.thegoldspeculator.com. Or you may subscribe by sending a check for $290 ($10 cash discount) to The One-handed Economist, 614 Nashua St. #122, Milford, N.H. 03055. Both the price of gold and the gold stocks are looking explosive, and I am confident of a good autumn.