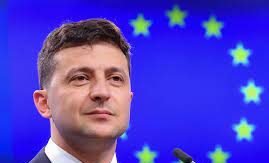 update(5:10pmET): During their Sunday phone call Ukraine’s President Zelensky asked Biden to visit Kiev in person amid continuing White House claims that a Russian invasion is set to happen “any day” now.

Saying that major Ukrainian cities are “under safe protection,” Zelensky suggested that a visit of the US president in person would stop the spread of panic and prevent escalation. “I am convinced that your visit to Kyiv in the coming days… would be a powerful signal and help stabilize the situation,” Zelensky was quoted as saying in the call.

“We will stop any escalation. The Ukrainian capital, Kiev, other cities in our country – Kharkov and Lvov, Dnepr and Odessa – are under safe protection,” Zelensky told the US president.

Zelensky himself and other top Kiev officials have in the past days once again been urging Washington to calm down its rhetoric. On Saturday the Ukrainian leader publicly urged the US to provide evidence or any relevant intelligence to back its claims of an “imminent” Russian invasion. That Zelensky has now gone so far as to issue a personal invitation for Biden to travel to Ukraine is clearly a move aimed at directly combatting the White House’s persistent fear-mongering and overblown predictions regarding Russia’s intent.

As for the White House call readout, it was brief and scant on details, while again underscoring the path for diplomacy remains open:

President Biden reaffirmed the commitment of the United States to Ukraine’s sovereignty and territorial integrity.  President Biden made clear that the United States would respond swiftly and decisively, together with its Allies and partners, to any further Russian aggression against Ukraine.  The two leaders agreed on the importance of continuing to pursue diplomacy and deterrence in response to Russia’s military build-up on Ukraine’s borders.

Meanwhile, the below tweet from the Russian embassy in the UK is being seen by some as a “ray of hope” – strongly signaling there will be no Russian offensive:

However, speculation over the timing of the US-predicted Russian invasion scenario abounds…

Will Russia invade Ukraine during the Super Bowl?

In Tom Clancy's "The Sum of All Fears," the Kremlin did not understand the significance of the Super Bowl.

Another Sunday and Biden’s national security adviser is at it again making the rounds on the big network news shows, warning the Russian invasion will invade Ukraine “any day now” – at this point a familiar refrain we’ve heard for multiple weeks running…

“We cannot perfectly predict the day, but we have now been saying for some time that we are in the window, and an invasion could begin, a major military action could begin by Russia in Ukraine any day now — that includes this coming week, before the end of the Olympics,” Jake Sullivan told CNN’s Jake Tapper.

This latest round of breathless White House proclamations and predictions of the Russians are coming! began in earnest Friday afternoon when the administration told reporters that Putin has made the decision to launch a large military offensive.

US officials anticipate a horrific, bloody campaign that begins with two days or aerial bombardment and electronic warfare, followed by an invasion, with the possible goal of regime change.

Multiple countries have now followed Washington’s lead in drawing down embassy and diplomatic staff from Ukraine to get people “out of harm’s way” – with the latest over the weekend being Australia. This is what the alarmism and panic emanating from the White House has wrought…

The prime minister, Scott Morrison, has ordered the evacuation of the Australian embassy in Kyiv, warning the situation in Ukraine has reached a dangerous stage.

Australia’s foreign affairs minister, Marise Payne, says the government has directed the departure of embassy staff to a temporary office in Lviv, with the buildup of Russian troops on the border.

“The situation is deteriorating and is reaching a very dangerous stage,” Morrison said on Sunday.

This is the latest in a growing list of countries withdrawing embassy personnel including Israel, the UK, the Netherlands, Latvia, Japan, and South Korea.

But the all-important and central question that’s not being asked is once again: what’s the view from Kiev? What is the Ukrainian government’s reaction to the latest White House statements on the crisis? How about the President of Ukraine himself?

Kiev is not too happy, and is demanding proof from US intelligence backing the new dire allegations that Russia is poised to go in:

“There has been too much information about a full-scale war with Russia – even specific dates have been announced. We understand there are risks. If you have any additional information regarding the 100 percent guaranteed invasion of Ukraine by Russia on 16 February, please give it to us,” Volodymyr Zelensky told reporters on Saturday.

Naturally, Ukraine’s leaders are trying to calm the panic which Washington pronouncements and the Western media echo chamber have created…

And a fresh report from NBC News taken from the streets of Kiev suggests that many common Ukrainian citizens too can see through the hype:

Now, as the West warns a fresh attack is a “distinct possibility” as soon as next week, many in Kyiv aren’t convinced.

“I don’t believe that Russia is going to invade Kyiv. The situation is wound up from both sides,” Oleksandr Bovtach, 55, told NBC News. “The West and Putin are playing each other’s nerves.”

Although some are wary of an invasion, few are preparing for that possibility.

And notably, a number of longtime Russia observers and mainstream journalists living on the ground in the region are beginning to have serious doubts…

I admit. I have not seen The Intelligence. But there's never been a time when my understanding of Russia — my 15 years of reporting on Russia and Ukraine — has been so at odds with what the U.S. government says about Russia and Ukraine. I hope I'm right, and they're wrong.

Biden and Zelensky are expected to hold a phone call Sunday, where it’s likely the Ukrainian leader will ask for Biden for firm evidence backing the latest White House alarmist claims. This will likely be a repeat of the last call they held: Biden and Zelensky last spoke last month and it “did not go well,” a senior Ukrainian official told CNN at the time, amid disagreements over the “risk levels” of a Russian attack.