The Human Cost: “Your Life And The Lives of Those You Love Are Just Pawns On Their Chessboard” 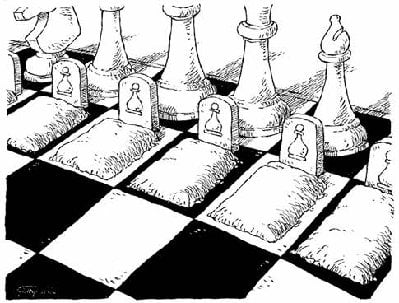 There is no single event that has brought the world to the crisis which we now face. It’s been a coordinated, long-term plan whose seeds were sown decades ago.

It will soon come to a head on an economic and geo-political scale, and the consequences will be severe for most of the seven billion people on this planet.

It should be clear that military intervention in Syria and Iran isn’t being considered; it’s a forgone conclusion, just as it was in Iraq and Libya. The U.S. is actively working to create the context which gives them the diplomatic cover to do what they already have planned.

The motive for these invasions and covert actions becomes clear when we look at them in their full context and connect the dots. Those who control the United States understand that even if a few countries begin to sell their oil in another currency it will set off a chain reaction and the dollar will collapse.

They understand that there is absolutely nothing else holding up the value of dollar at this point, and so does the rest of the world. But rather than accepting the fact that the dollar is nearing the end of its lifespan, The Powers That Be have made a calculated gambit.

They have decided to use the brute force of the U.S. military to crush each and every resistant state in the middle east and Africa. That in itself would be bad enough.

But what you need to understand is that this is not going to end with Iran.

China and Russia have stated publicly, and on no uncertain terms, that they will not tolerate an attack on Iran or Syria. Iran is one of their key allies – one of the last independent oil producers in the region – and they understand that if Iran falls they will have no way to escape the dollar without going to war. And yet the United States is pushing forward in spite of the warnings.

But who was it that put us on this course? What kind of psychopath is willing to intentionally set off a global conflict that will lead to millions of deaths just to protect the value of a paper currency?

It obviously isn’t the President. The decision to invade Libya, Syria and Iran was made long before Obama had risen to the national spotlight, and yet he’s carrying out his duty just like the puppets that preceded him.

So, who is it that pulls the strings?

Often, the best answer to questions like this are found by asking another question.

Obviously those who have the power to print the dollar out of thin air have the most to lose if the dollar should fall, and since 1913 that power has been held by the Federal Reserve.

The Federal Reserve is a private entity owned by a conglomerate of the most powerful banks in the world. And the men that control those banks are the ones who pull the strings.

To them this is just a game. Your life and the lives of those you love are just pawns on their chessboard…