Xenophobe President Slams Immigrants: “All Americans Are Rightly Disturbed By The Large Numbers Of Illegal Aliens Entering Our Country” 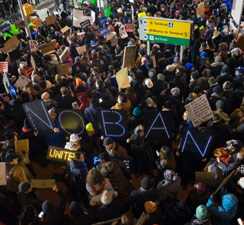 From the President of the United States:

All Americans, not only the states most heavily affected, but in every place in this country are rightly disturbed by the large numbers of illegal aliens entering our country.

…We will try to do more to speed the deportation of illegal aliens who are arrested for crimes.

It is wrong and ultimately self defeating for a nation of immigrants to permit the kind of abuse of our immigration laws we have seen in recent years and we must do more to stop it.

The President’s words were met with a standing ovation in Congress.

But if you thought it was President Donald Trump, think again.

These are the words of President Bill Clinton in his 1995 State of The Union address:

Related: Mass Deportations Loom: 7 Ways To Get Kicked Out Of America If You Are Here Illegally