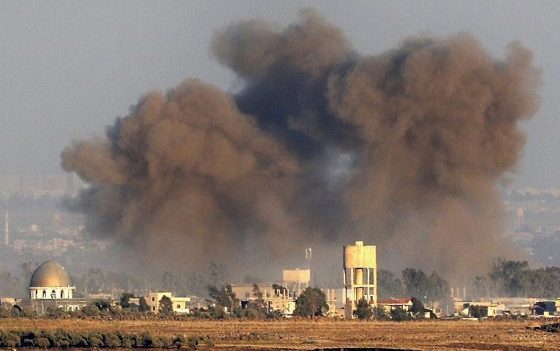 Things are happening quickly, folks. The Syrian army has said that Israeli jets have caused massive explosions when they struck army bases in central Syria. The information on this attack is still limited.

A lot of the footage is “unverified” an this could very well be a false flag attack. It’s so difficult to say. With everything that’s going on, do not let your guard down and resort to fear and panic. Instead, be aware of what’s happening and keep your eyes open at all times.

Salamiyah is located in the Hama province of central Syria, on the highway leading from Homs towards Raqqa, the former “capital” of Islamic State (IS, formerly ISIS) terrorists now held by US-backed Kurdish militia.

The Hama strikes followed the attacks on As-Suwayda and Deir ez-Zor provinces on Tuesday evening. The attacks did result in two soldiers killed, several injured, and some material damage, the SANA news agency reported, citing military sources. The military also said the strike in Deir ez-Zor came from east of Palmyra and targeted positions along the M20 highway between the cities of Sukhnah and Deir ez-Zor itself. The attacker was not identified. -RT

Impressive explosions from the aftermath of an alleged #Israel|i airstrike in Salamiyah this evening located in the Hama Governorate. #Syria pic.twitter.com/Iuuck3wNPo

Israel has repeatedly launched air and missile strikes against what it says are Iranian targets in Syria. But Tel Aviv is not in the habit of acknowledging the attacks. The government in Damascus has accused Israeli jets of using civilian aircraft as human shields in order to penetrate Syrian air defenses.

The only thing that’s likely, is that this is not organic and is somehow all a part of the overall plan to create a permanent human slave population of earth.

Regional intelligence sources say that Israel’s strikes on Syria are part of a shadow war approved by Washington and part of the anti-Iran policy that has undermined in the last two years Iran’s extensive military power without triggering a major increase in hostilities. – Haaretz

The Israeli army has declined to comment on these attacks, according to Haaretz. Later, government-sponsored propaganda television reported that Israeli jets had struck several army bases in the central Hama province. The army said its air defenses had downed several “hostile targets” in the airspace above Hama province.

Stay focused and alert. This has the potential to unfold quickly. Keep your mind open and look at everything and question everything. We live in interesting times.