Worst Case Scenario = 73% Down From Here 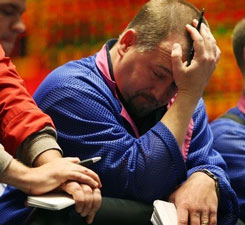 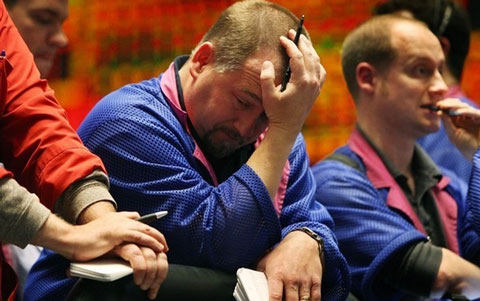 As the stock market gyrates higher and lower in a fairly narrow range, the spokesmodels and talking heads on CNBC breathlessly regurgitate the standard bullish mantra designed to keep the muppets in the market. They are employees of a massive corporation whose bottom line and stock price depend upon advertising revenues reaped from Wall Street and K Street. They aren’t journalists. They are propagandists disguised as journalists. Their job is to keep you confused, misinformed, and ignorant of the true facts.

Based on the never ending happy talk and buy now gibberish spouted by the pundit lackeys, you would think we are experiencing a bull market of epic proportions and anyone who hasn’t been in the market has missed out on tremendous gains. There’s one little problem with that bit of propaganda. It’s completely false. The Fed turned off the QE spigot at the end of October 2014 and the market has gone nowhere ever since.

QE1 began in September 2008, taking the Fed balance sheet from $900 billion to $2.3 trillion by June 2010. This helped halt the stock market crash and drove the S&P 500 up by 50% from its March 2009 lows. QE2 was implemented in November 2010 and increased the Fed balance sheet to $2.9 trillion by the end of 2011. This resulted in an unacceptable 10% increase in the S&P 500, so the Fed cranked up their printing presses to hyper-speed and launched the mother of all quantitative easings, with QE3 pushing their balance sheet to $4.5 trillion by October 2014, when they ceased their “Save a Wall Street Banker” campaign. 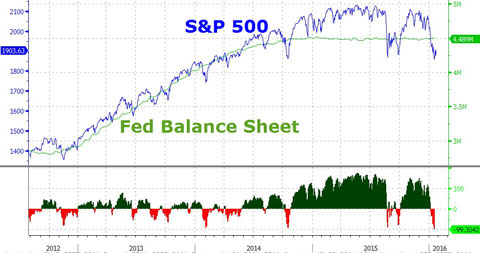 As Main Street dies, Wall Street has been paved in gold. The S&P 500 soared to all-time highs, with 40% gains from the September 2012 QE3 launch until its cessation in October 2014. Like a heroine addict, Wall Street has experienced withdrawal symptoms ever since, and begs for more monetary easing injections. Yellen and her gang of central bank drug dealers keep the patient from dying by continuing doses of ZIRP and psychologically comforting dialogue designed to cheer up Wall Street bankers.

QE3 ended 17 months ago and shockingly the S&P 500 is exactly where it was 17 months ago. How many bull markets go flat for 17 months? As John Hussman accurately points out, we are experiencing a topping formation in the third and biggest bubble of the last 16 years. It’s a long way down from here.

With the S&P 500 Index at the same level it set in early-November 2014, and the broad NYSE Composite Index unchanged since October 2013, the stock market continues to trace out a massive arc that is likely to be recognized, in hindsight, as the top formation of the third financial bubble in 16 years.

The chart below shows monthly bars for the S&P 500 since 1995. It’s difficult to imagine that the current situation will end well, but it’s quite easy to lose a full-cycle perspective when so much focus is placed on day-to-day fluctuations. The repeated speculative episodes since 2000 have taken historically-reliable valuation measures to extremes seen previously only at the 1929 peak and to a lesser extent, the 1937 peak (which was also followed by a market loss of 50%). Throughout history, at each valuation extreme – certainly in 2000, 2007 and today – investors have openly embraced rich valuations in the belief that they represent some new, modern and acceptable “norm”, failing to recognize the virtually one-to-one correspondence between elevated valuations and depressed subsequent investment outcomes. 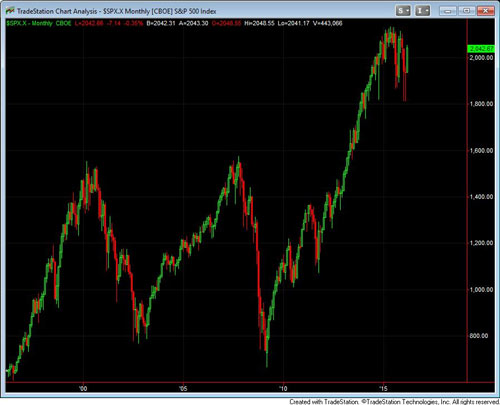 So we’ve had the stock market going nowhere for 17 months, with valuations at obscene levels based on all historical precedents, corporate profits falling for three straight quarters, real wages of working people stagnant at 1988 levels, and home prices soaring to unreachable heights due to hot money from China, Wall Street hedge funds, and the ever resilient and late flipper class. Consumer spending, which accounts for 67% of our economy, is dead in the water as Obamacare, soaring rents, rising food costs and 0% interest on savings accounts drain the life out of middle class households. The average person (not Wall Street bankers, government apparatchiks, or other parasites of the establishment) is experiencing and has been experiencing a recession for years.

Low interest rates and double talk from clueless academic Federal Reserve lackeys cannot and will not prop up the stock market forever. Corporate buybacks, financed with cheap debt, by insanely greedy CEOs is the last leg in this wobbly stool. This will come to a screeching halt as profits collapse and the market goes south.

Stocks always fall during a recession and we have entered a recession, whether it is broadcast by the corporate controlled media or not. The last 17 months have offered the public an opportunity to exit near the top. Anyone who hasn’t taken advantage of this opportunity will be regretful in the not too distant future. With valuations twice historical norms, there is no place to go but down. Hussman understands history better than the brainless twits on CNBC.

Wall Street analysts talk endlessly on financial television about low interest rates “justifying” current valuations, without completing the story that even if this were true,  these rich valuations still imply predictably dismal future returns on stocks, particularly on a 10-12 year horizon.

Every bear market in history, including those that completed recent cycles, has taken valuations to the point where expected long-term returns approached or exceeded 10% annually. This is also true for bear markets prior to the 1960’s when interest rates regularly hovered at levels similar to the present.

On a combined set of historically-reliable measures, we presently estimate that valuations are more than twice their historical norms; twice the level that has routinely been pierced to the downside in even the most run-of-the-mill market cycle completions across a century of history, regardless of the level of interest rates.

Warren Buffett’s favorite valuation method for the market (Market Cap/GDP), which he has disregarded now that he has sold out to the crony capitalist establishment, is at extreme levels only seen at historic market tops (1929, 2000, 2007). Based upon basic mathematical equations and history, according to Hussman, the S&P 500 will be no higher in 2028 than it is today. I wonder how many financial advisors have put that in their neat little investment models? How many Boomers and Gen Xers can handle a 0% return over the next 12 years?

With the S&P 500 still within a few percent of its record 2015 high, investors have a critical opportunity here to understand the difference between a run-of-the-mill outcome and a worst-case scenario. The present ratio of MarketCap/GDP is about 1.2, which we fully expect to be followed by nominal total returns in the S&P 500 of about 2% annually over the coming 12 years. Given the current dividend yield on the S&P 500 actually exceeds 2%, the historically run-of-the-mill expectation from current valuations is that the S&P 500 Index itself will be below current levels 12 years from today, in 2028.

The arrogant ego maniacal pricks, who inhabit the upper echelons of the Wall Street towers of babel, confidently disregard facts, history, and basic risk management concepts as they are about to inflict the third market collapse in sixteen years upon the unsuspecting public. Hussman‘s projections in 2000 were right and his projections today will be proven right.

I realize that a projection like this seems preposterous. Unfortunately, this just reflects objective evidence that has remained reliable over a century of market cycles. Recall that our real-time projection for 10-year S&P 500 total returns in 2000 was correctly negative even on the basis of optimistic assumptions. The basic arithmetic was the same.

Now for the kicker. Throughout history the stock market has experienced secular bull and bear markets where valuations go from extremely overvalued to extremely undervalued. The secular bear market from 1966 until 1982 was followed by a secular bull market from 1982 until 2000. In 2008/2009 we were headed towards a secular low, but the Fed intervened in order to save their Wall Street owners from bankruptcy. The system was not purged of its excesses. The chaff was not separated from the wheat. Therefore, the secular lows have not happened yet.

Using basic mathematical relationships which have held for over 100 years of stock market performance, Hussman concludes a run of the mill reversion to the mean will result in a 50% stock market loss. In order to reach a secular low in valuations, we would experience a 73% loss from here. That seems inconceivable to a population of normalcy bias blinded, iGadget distracted, math challenged CNBC believers. Will you let cognitive dissonance rule your decision making or will you use reason to understand the peril directly ahead?

Notice that expected market returns of about 6% have historically been associated with a MarketCap/GDP ratio of 0.8. The historical norm associated with 10% equity returns has been about 0.6. The secular lows of 1949 and 1982 hit ratios about 0.33. So a rather minimal completion of the current cycle would take the market down by about -33% from here (=0.8/1.2-1), a run-of-the-mill cycle completion would be about -50%, and a truly worst-case scenario would take the market down by about -73% to a secular valuation low in the current market cycle. One can’t rule anything out given reckless monetary policy, fragile European banks, excessive covenant-lite lending and so forth, but I don’t expect more than a run-of-the-mill cycle completion here.

I’m afraid the lesson of history is that people never learn from the lessons of history. It’s always different this time. People will ignore the facts until it is too late. Every historically accurate statistical valuation method proves we are in the mother of all bubbles, created by Federal Reserve sociopaths. Every reliable economic indicator is flashing red for recession. There is absolutely no doubt this market is going to crash. It’s just a matter of when and by how much. If you think you can get out in time, be my guest and buy some more Amazon, Google, and Facebook on margin. Or you can heed the lessons of history as laid out by John Hussman. Your choice.

The central lesson to be learned from market history – and particularly from yield-seeking bubbles – is not that valuations are irrelevant, nor that central bank intervention is capable of sustaining bubbles permanently. Rather, the lessons are: 1) market internals, and the investor risk-preferences they convey, are the hinge between overvalued markets that remain elevated and those that collapse, and 2) unlike prior market cycles, even extreme “overvalued, overbought, overbullish” conditions were insufficient to derail speculation in the face of reckless monetary policy since 2009 – one had to wait until market internals deteriorated explicitly before adopting a hard-negative market outlook.

If one learns those hard-won lessons about the importance of investor risk-preferences and market internals over portions of the market cycle, one need not fall prey to the delusion that easy money can support stocks once risk-aversion sets in (recall 2000-2002 and 2007-2009), and one need not make the mistake of discarding the essential lessons that valuations have taught in complete market cycles across a century of history.

For more analysis, news and commentary visit The Burning Platform