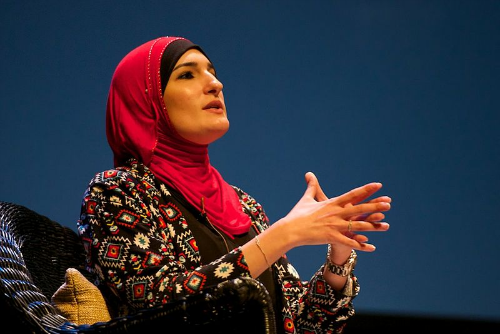 The far-left and radical Islam have made strange bedfellows in recent years. You would think that they’d be completely in opposition to each other, given how different their values are, but the far-left is shockingly tolerant of radical Islam. They’ll rail against what they think is an injustice in their own society, like the patriarchy, the wage gap, or rape culture in the West (all of which are provably false). But they’ll turn a blind eye to radical Islam, which is an actual patriarchy that treats women like chattel, routinely executes gays, and punishes women when they’re raped.

No one embodies this cognitive dissonance more than Linda Sarsour. She was one of the lead organizers of the Women’s March earlier this year, and has since become a rising start among the left. But despite her progressive credentials, she also frequently expresses support for sharia law, and has been known to work with convicted terrorists.

She claims to be an advocate for peace, but some of her statements would suggest otherwise. Last weekend she gave a speech at the Islamic Society of North America Convention, and called for “jihad” against the Trump administration.

“I hope that we when we stand up to those who oppress our communities that Allah accepts from us that as a form of jihad. That we are struggling against tyrants and rulers not only abroad in the Middle East or in the other side of the world, but here in these United States of America where you have fascists and white supremacists and Islamophobes reigning in the White House,” Sarsour said.

“Our number one and top priority is to protect and defend our community, it is not to assimilate and please any other people and authority,” she said. “Our obligation is to our young people, is to our women, to make sure our women are protected in our community.”

“Our top priority and even higher than all those other priorities is to please Allah and only Allah,” Sarsour declared.

You can see the speech for yourself below.

Sarsour is emblematic of a trend that we’re seeing on the left these days. They’re becoming attached at the hip with radical Islam, despite the fact that these ideologies don’t seem to have anything in common.

Though these belief systems are very different, they do have a common enemy. What the left and radical Islam share is a hatred for Western civilization and values (hence her call to refuse any form of assimilation). Perhaps they aren’t such strange bedfellows after all.