Woman Who Thought Obama Would Pay for Her Gas And Mortgage: “He Lied About Everything” 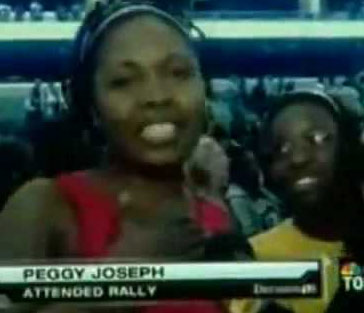 She’s the woman who swooned over Barack Obama’s every word and was so excited about the fact that all her problems would be solved once he became President that she broke down in tears. In a video that went viral just days before the election in October of 2008 Joseph showed her exuberance and unwavering commitment to hope and change by exclaiming that she would no longer have to worry about putting gas in her car or paying her mortgage.

“If I help him,” Joseph proclaimed, “he’s going to help me.”

Filmmaker Joel Gilbert, who produced the new documentary There’s No Place Like Utopia decided to give Joseph a visit to see how all that hopey changey thing was working out for her. You may or may not be surprised to learn that she’s still waiting for those promises to come true.

In the following video Gilbert, who gifted Joseph with some ruby slippers presumably to help her return from her fairy tale ride, asks her if Obama helped pay for her mortgage and gas.

Hahaha… Absolutely not. My mortgage got worse and gas prices got higher.

During that time we needed a change, but a change for the better and not for the worse.

He had a very big voice, just like the Wizard of Oz.  The wizard was this teeny teeny tiny man… and I think it’s the same thing with Obama… the man behind the curtain… not who we thought or expected him to be.

I started getting a little more educated about politics and reading more. What I learned is, ‘never trust a wizard.’

It’s within ourselves to have the determination, the courage and the brains to bring us to our destiny.

Truth and honesty are important… He lied about everything.

At some point in our lives we’ve all been fooled by a fast-talking politician who made promises that weren’t kept. Unlike the tens of millions of other people who elected Barack Obama to not one, but two Presidencies, Peggy Joseph at least has the courage to admit it.

Joel Gilbert, who’s talked to hundreds of people who also fell for the hype, suggests Peggy Joseph is not alone:

According to Gilbert, his documentary shows similar experiences with other one-time Obama supporters who bought into his hope and change rhetoric but quickly discovered he’s not what he says.

“In my journey through America in ‘There’s No Place Like Utopia,’ I met a lot of people living in horrible conditions, particularly African Americans, who I was surprised to learn were now staunch conservatives as a result of living in progressive-controlled cities like Detroit, Chicago and Newark,” Gilbert said.

“After 60 years of progressive politics in their cities, they understood very clearly that they had not been progressing but rather regressing all this time, and they were mad. They felt they had been used and tricked by Obama for their votes and that he never intended to keep any of his promises, just like the Wizard of Oz.”