Will The Large Hadron Collider Open Up A Portal To Another Dimension? 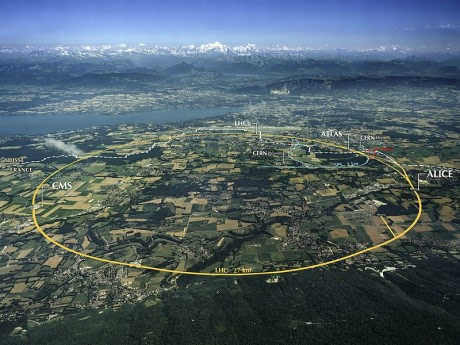 This article was originally published by Michael Snyder at End of the American Dream. Michael is the author of The Beginning of the End.

What in the world is going on over at CERN? Are scientists playing around with forces that they simply do not understand?  Some of the things that I am going to share with you in this article are deeply disturbing. The European Organization for Nuclear Research (also known as CERN) is purposely smashing particles into one another at astonishingly high speeds.  If you think that sounds incredibly dangerous, you are not alone.  Scientists all over the world have suggested that the bizarre experiments taking place at CERN could either open a black hole, destroy the entire world or open up a portal to another dimension.  But none of those concerns have been taken seriously.  Instead, scientists at CERN just continue to smash more and more particles into each other at higher and higher speeds.

Just recently, I was at a meeting during which Brad Scott suggested that the horrific earthquake in Nepal on April 25th coincided with some very unusual activity at the Large Hadron Collider.  I had never heard this before, and since I am skeptical by nature, I decided to not just take his word for it and look into it myself.  And the truth is that it is hard to come to any solid conclusions about this.  You can watch this video and decide for yourself.

But without a doubt, I believe that there are reasons to be deeply, deeply concerned about what CERN is doing.  If you are not familiar with  the Large Hadron Collider, the following is some pretty good basic information from Wikipedia…

The Large Hadron Collider (LHC) is the world’s largest and most powerful particle collider, the largest, most complex experimental facility ever built, and the largest single machine in the world.[1] It was built by the European Organization for Nuclear Research (CERN) between 1998 and 2008 in collaboration with over 10,000 scientists and engineers from over 100 countries, as well as hundreds of universities and laboratories.[2] It lies in a tunnel 27 kilometres (17 mi) in circumference, as deep as 175 metres (574 ft) beneath the Franco-Swiss border near Geneva,Switzerland. Its first research run took place from 30 March 2010 to 13 February 2013 at an initial energy of 3.5 teraelectronvolts (TeV) per beam (7 TeV total), almost 4 times more than the previous world record for a collider,[3] rising to 4 TeV per beam (8 TeV total) from 2012.[4][5]On 13 February 2013 the LHC’s first run officially ended, and it was shut down for planned upgrades. ‘Test’ collisions restarted in the upgraded collider on 5 April 2015,[6][7]reaching 6.5 TeV per beam on 20 May 2015 (13 TeV total, the current world record for particle collisions). Its second research run commenced on schedule, on 3 June 2015.

As this second run progresses, the number of particles that are being smashed together will continue to increase.

So is it really a good idea to be increasing the frequency of collisions so much?  The following is an excerpt from a recent press release that contained some of the specific technical details…

As for any machine exploring a new energy frontier, operators at the LHC face many challenges on a daily basis. Since the start of Run 2, they have been gradually increasing the intensity of the LHC’s two beams, which travel in opposite directions around the 27-kilometre ring at almost the speed of light. The LHC has run at the record high energy with each beam containing up to 476 bunches of 100 billion protons, delivering collisions every 50 nanoseconds. In the coming days, the intensity should increase further with a new rhythm of 25 nanoseconds. After a planned technical stop in early September, the teams will also be able to increase the number of bunches with the goal of reaching more than 2000 bunches per beam by the end of 2015.

“During the hardware-commissioning phase, we have learnt to manage carefully the huge energy stored in the magnets. Now with beam commissioning we have to learn progressively how to store and handle the beam energy,” said CERN Director of Accelerators and Technology Frédérick Bordry. “Our goal for 2015 is to reach the nominal performance of the LHC at 13 TeV so as to exploit its potential from 2016 to 2018.”

At full capacity, the Large Hadron Collider can smash protons together at a rate of a billion per second.

That is a number that is almost unimaginable.

So precisely what are they hoping to accomplish by this?

Most of the articles about the LHC in the mainstream media discuss mundane scientific research goals that don’t really seem to justify all of the time, effort and money that are being expended.

Could it be possible that the top officials at CERN actually have something else in mind?

The director of research at CERN, physicist Sergio Bertolucci, has stated that the LHC may create a “door” to “an extra dimension”.  According to him, something might come out of that door, or “we might send something through it”…

A top boffin at the Large Hadron Collider (LHC) says that the titanic machine may possibly create or discover previously unimagined scientific phenomena, or “unknown unknowns” – for instance “an extra dimension“.

“Out of this door might come something, or we might send something through it,” said Sergio Bertolucci, who is Director for Research and Scientific Computing at CERN, briefing reporters including the Reg at CERN HQ earlier this week.

But why create a portal to another dimension if he doesn’t have any idea what we might encounter?

Other prominent scientific voices have expressed deep concern about what might happen at CERN.

For instance, Stephen Hawking has suggested that the LHC may be capable of creating a black hole that could swallow our world and destroy the entire universe…

Stephen Hawking says the ‘God Particle’ that scientists believe created the world could actually end it, too.

The particle – know as Higgs boson – “has the worrisome feature” that it could become unstable at extremely high energies and create a “black hole” that would collapse the universe, the legendary British physicist has warned in a new book titled Starmus, according to the Daily Express.

“This could happen at any time and we wouldn’t see it coming,” Hawking claimed in the book.

Others have raised questions that are more philosophical in nature. 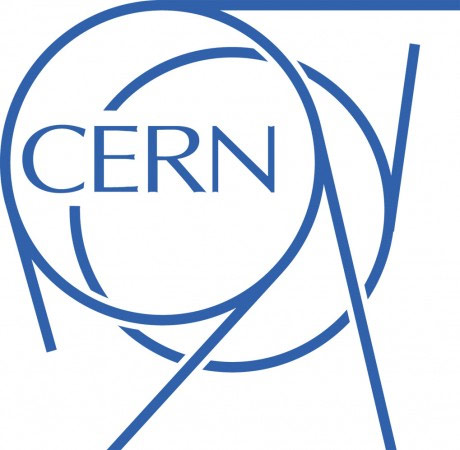 And why is there a statue of the Hindu god Shiva (“the destroyer”) standing right outside CERN headquarters?… 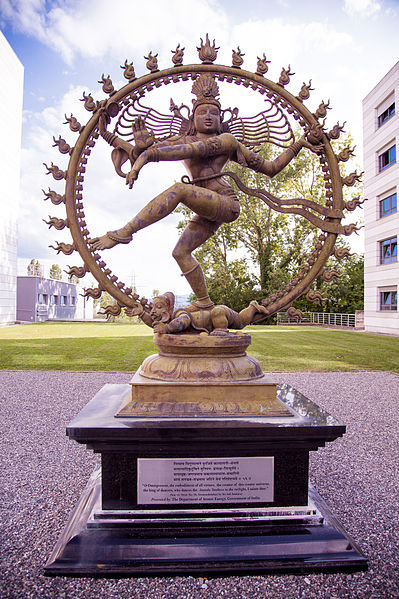 In the YouTube video posted below, Jim Staley points these things out, along with the fact that the LHC is built on the site of an ancient town that was dedicated to “Apollyon” in Roman times.  I very much encourage you to watch this 13 minute video…

So what are we to make of all this?

Are European scientists knowingly or unknowingly messing around with some very dark forces?

Let us hope that we don’t get a definitive answer to that question any time soon.

And of course the scientific world doesn’t plan to stop here.  At this point there are plans to have an even larger particle collider operational by 2026…

Physicists hope to eventually build larger accelerators that would produce collisions with even more energy than the LHC, which might allow them to discover new particles and better understand dark matter. The proposed International Linear Collider, for instance, would be more than 20 miles long, with a pair of accelerators facing each other straight on, rather than the familiar ring design of the LHC and other accelerators. It’s still pending, but could be built in Japan, with scientists hoping to have it operational by 2026.

I don’t have all the answers, but hopefully I have raised some very important questions in this article.

So what do you think?  Please feel free to join the discussion by posting a comment below…

As People Tire Of Tyranny, Refusal To Comply With Ruling Class Could Cause A “New Deadly Variant