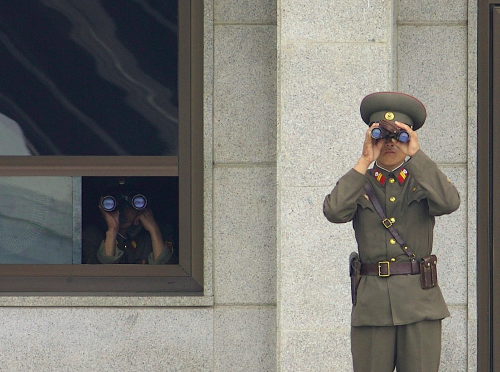 By now most people are completely desensitized to stories involving North Korea. One can only hear about so many blustering threats, missile launches, and state sanctioned executions, before those incidents are no longer surprising. Over the years we’ve seen it all, and most folks don’t really pay much attention to what’s going on in the Hermit Kingdom. That’s unfortunate, because they’re not paying attention as the Trump administration inches towards war with North Korea.

The first definite sign that the current administration was going to take a different approach to North Korea, was when Secretary of State Rex Tillerson stated emphatically last month that “all options are on the table.”

“Let me be very clear. The policy of strategic patience has ended. We are exploring a new range of diplomatic, security and economic measures. All options are on the table,” Tillerson told reporters during a joint news conference with South Korean Foreign Minister Yun Byung-se on Friday.

“Certainly we do not want to, for things to get to military conflict,” Tillerson said.

However, he went on to say that “if they (North Korea) elevate the threat of their weapons program to a level that we believe requires action, then, that option’s on the table.”

He added that a “comprehensive set of capabilities” is being developed to deal with the country.

And at least one of those options is already in place. Before that interview even took place, US special forces were already training to decapitate the North Korean regime.

Despite that threat, North Korea has refused to back down on their nuclear program, and for good reason. Kim Jong-un’s regime believes that they won’t be safe from foreign invasion unless they have a nuclear tipped ICBM that can be launched at targets that are thousands of miles away.

The US government on the other hand, has taken a different position. Our government believes that North Korea can’t be trusted with that kind of military capability. In a sense both sides are correct, but clearly those opinions are diametrically opposed. Unless one side backs down, there will be war before North Korea demonstrates that it can launch a nuclear tipped ICBM.

And President Trump has tacitly admitted that he’s willing to go to war with North Korea. During a recent interview with Financial Times, he stated if China can’t or won’t reign in North Korea, then our government is willing to “act alone.”

POTOMAC FALLS, Va. (AP) — President Donald Trump says that the United States is prepared to act alone if China does not take a tougher stand against North Korea’s nuclear program.

Trump’s comments in an interview with the Financial Times come just days before he is set to host Chinese President Xi Jinping at his Mar-a-Lago estate in South Florida. The two are expected to discuss a number of issues, including North Korea, trade and territorial disputes in the South China Sea during their meeting on Thursday and Friday.

“Yes, we will talk about North Korea,” Trump told the newspaper for a story that appeared Sunday on its website. “And China has great influence over North Korea. And China will either decide to help us with North Korea, or they won’t. And if they do that will be very good for China, and if they don’t it won’t be good for anyone.”

Without China’s help, there can’t be any peaceful resolution with North Korea, because China is the closest thing to a friend that country has on the global stage. Unfortunately, there isn’t much of a chance that China is going to defang this regime anytime soon. If they could they would have done so a long time ago. They may enjoy having a communist buffer state between their capital and an American ally in the south, but they don’t want to live right next door to a certifiably insane regime with nuclear weapons.

I don’t think that China could ever convince North Korea to give up its nuclear program. Kim Jong-un saw what happened to countries like Libya and Iraq after they abandoned their WMD programs. And North Korea is probably just as afraid of regime change at the hands of China as they are of America, because China would prefer a buffer state that is much more obedient and prosperous (and you know, not armed with nukes that at the command of a lunatic). Even North Korea’s closest friend is kind of an enemy, and they need capable nukes to defend themselves from China as well.

So if China can’t convince them to give up their nukes, and the United States won’t tolerate a nuclear armed North Korea, then there’s only two possible outcomes. Either our government is going to blink in this standoff, or there’s going to be war.