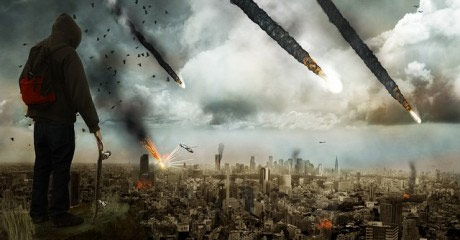 This article was originally published by Michael Snyder at End of the American Dream. If you want to know what things in America are going to look like in a few years read his widely popular book The Beginning of the End.

Internet buzz about a giant meteor that is going to strike our planet in September has become so intense that NASA has been forced to issue a statement publicly denying that it is going to happen.  NASA insists that the agency knows of “no asteroid or comet currently on a collision course with Earth”, and that “no large object is likely to strike the Earth any time in the next several hundred years”.  To be honest, NASA should perhaps hold off on making such bold statements concerning what will happen in the future considering the fact that the Chelyabinsk meteor that exploded over Russia in 2013 took them totally by surprise.  In any event, what we do know is that our region of space is absolutely packed with meteors and asteroids.  At this point, approximately 10,000 major near earth objects have been discovered by scientists, and about 10 percent of them are one kilometer or larger in size.  If any of those big ones were to hit us, we would be looking at another Tunguska event or worse.  Very large meteors have struck our planet before, and they will hit us again.  It is only a matter of time.

But of most immediate concern to lots of people out there are the various theories that are floating around about September.  The following is an excerpt from an article that appeared in a British news source just this week…

Internet bloggers and Armageddon conspiracists are predicting the “end of days” event to happen between September 22 to 28.

One blogger has worryingly suggested US residents retain their firearms after suggesting that the controversial military operation Jade Helm taking place between July and September in several southern states is in preparation for predicted anarchy that could ensue as the asteroid nears the planet.

Meanwhile, many fringe religious groups and Biblical theorists are claiming the predicted impact will herald the beginning of the Rapture – a seven-year tribulation period.

A NASA spokesman said: “NASA knows of no asteroid or comet currently on a collision course with Earth, so the probability of a major collision is quite small.

“In fact, as best as we can tell, no large object is likely to strike the Earth any time in the next several hundred years.”

So NASA has spoken.

But is NASA correct?

We will just have to wait and see.

An Inquisitr article points to the prophecies about a meteor hitting the Atlantic Ocean near the island of Puerto Rico given by Efrain Rodriguez as the source for these theories about September.  But the article unfairly neglects to point out that Efrain Rodriguez never claimed that it would happen in a particular month or during any particular calendar year…

The growing mass hysteria appears to have originated with a self proclaimed “prophet,” Rev. Efrain Rodriguez, who claimedhe sent a letter to NASA on Nov. 12, 2010, titled “Letter to the Space Agency… meteor heading toward Puerto Rico.”

In the letter, he claimed he had received a message from God that an asteroid that would “soon be seen in the alarm systems of NASA” was approaching. He said the asteroid would hit the ocean near Puerto Rico and cause a massive earthquake and tsunami that would devastate the East Coast of the U.S., Mexico, Central, and South America.

Warning against ignoring the message, he instructed NASA to issue an alert “so people can be relocated from the areas that are to be affected.”

If we do ever see an east coast tsunami of that magnitude, it would cause death and destruction along the eastern seaboard on a scale that most people cannot even imagine.  This is something that I pointed out in my previous article entitled “East Coast Tsunami: If It Happens, MILLIONS Of Americans Could Die“.

And it is a fallacy to think that NASA knows about everything that is happening in our region of space and sees anything that is coming toward us well in advance.  NASA is not all-powerful.  In fact, a large asteroid buzzed our planet just a few months ago and NASA did not even know that is was approaching.  So don’t put all of your trust in what NASA has to say.  Just consider what Professor Brian Cox recently told the Daily Mail…

In September, Brian Cox said we are at risk of being wiped out by asteroids – and we’re not taking the threat seriously.

‘There is an asteroid with our name on it and it will hit us,’ Professor Cox told MailOnline. In fact, the Earth had a ‘near-miss’ only a few months ago.

‘We didn’t see it,’ says the 46-year-old. ‘We saw it on the way out, but if it had just been a bit further over it would have probably wiped us out. These things happen.’

And it wasn’t the only one threatening Earth. Nasa is currently tracking 1,400 ‘potentially hazardous asteroids’ and predicting their future approaches and impact probabilities.

The threat is so serious that former astronaut Ed Lu has described it as ‘cosmic roulette’ and said that only ‘blind luck’ has so far saved humanity from a serious impact.

So for NASA to imply that nothing is going to hit us for hundreds of years is absolutely laughable.

One of the things that I have learned is that when you have imperfect knowledge you should not make absolute statements.  NASA needs to learn the same lesson.

And of course if a large object was heading toward the earth, NASA probably would not tell us anyway.  This is how the U.S. government works.  There is far more emphasis on “keeping everyone calm” than there is on being honest with the American people.

As always, do your own research and come to your own conclusions.

What we do know for certain is that giant meteors have hit our planet in the past, and it is just a matter of time before it happens again in our future.

Hopefully when the next giant rock comes hurtling toward us, someone will give us some sort of a warning in advance so that we can all get out of the way.