While Americans Are Celebrating Christmas, A Solar Eclipse Will Be Visible In Bethlehem 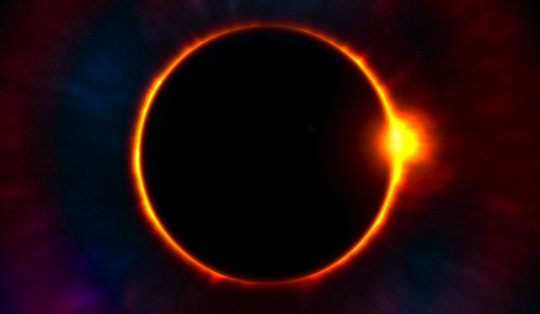 A lot of really strange things have been happening late in 2019, and now we have another one to add to the list.  While it is still Christmas night here in the United States, the other side of the world will be viewing a very unusual solar eclipse.

For those fortunate enough to be directly in the path of this eclipse, the moon will almost entirely cover the sun’s disk for a few minutes.  At the most dramatic moment, the moon will be covering 97 percent of the sun, and a “ring of fire” will appear to be surrounding the perimeter of the moon.  In other words, at the peak of this eclipse the entire middle portion of the sun will look like it is “missing”, and all that will be visible will be an eerie “ring of fire” that will be casting light around the edges of the moon.

This eclipse will not be visible anywhere in the United States, and so that probably explains why the U.S. media is not really talking a lot about it.

But NASA will be live streaming this event on their YouTube channel, and astronomers all over the globe are gearing up for one of the most significant astronomical events that we have seen in a long time.

The eclipse will be visible “in eastern Europe, Asia, northwest Australia, eastern Africa, and the Pacific and Indian Ocean”.  Israel is in the viewing zone, but it will only be a partial solar eclipse in Jerusalem, Bethlehem and other cities in the region.  A lot of people are actually flocking to Saudi Arabia for a really good view of the full eclipse, and what they will see promises to be quite spectacular…

Called everything from a “ring of fire” to a “ring of light,” an annular solar eclipse occurs when the moon is relatively small in the sky. The moon has a slightly elliptical orbit around Earth, so it can appear larger or smaller in the sky depending on its position. When it’s close, it causes a supermoon. When it’s far away, and it crosses the ecliptic (the path of the sun through our sky) as a new moon, it fits precisely within the sun’s disk. This Christmas, the moon will cover 97% of the center of the sun.

For those viewing this “sign in the sky” in the Middle East, it will be very early on December 26th, but during the eclipse, it will still be Christmas night here in the United States…

What begins at 03:43 a.m. Universal Time on December 26— that’s 22:43 p.m. EST and 19:43 p.m. PST on Christmas Day—is an annular solar eclipse. Since a New Moon is slightly further away than usual, it will appear smaller in the sky so will only block the center of the Sun’s disk. Observers will therefore see a ring around the Sun, and for a maximum of 3 minutes and 40 seconds.

Since the eclipse will not be visible in North America, there is no danger for us, but authorities are warning those in the viewing zone not to look directly at this eclipse without special glasses because it could potentially result in “total blindness”…

There’s a reason why this particular phenomenon is also called the “ring of fire” and sometimes, “ring of light”. That’s because watching the 3 minute 40 second eclipse without any protection for the eyes can lead to total blindness.

So does this “Christmas eclipse” have any sort of special significance?

But this certainly comes at a time when a lot of other weird things are starting to happen.

For example, earlier this month I wrote about the fact that the very last full moon of this decade happened on 12/12 at exactly 12:12 AM eastern time.  And what made it even stranger was the fact that this full moon occurred exactly 6,666 days from 9/11.

Once again, I don’t know if all that means anything, but the “coincidences” are really starting to pile up.

On top of everything else, a “gigantic asteroid” is going to go screaming by our planet just after Christmas…

A gigantic asteroid will zip past Earth just after Christmas, NASA reports.

The space agency’s Center for Near Earth Object Studies (CNEOS) estimates its diameter will be in the range of 919 to 2,034 feet.

Fortunately, that asteroid has no absolutely chance of hitting us, but it is yet another strange event in the heavens that is getting a lot of attention.

Throughout human history, events in the heavens have always been regarded as having special significance.  This time of the year, millions upon millions of Christians will read about how “wise men from the east” came to Bethlehem to see the baby Jesus.  They claimed to have seen “his star in the east”, and they traveled a vast distance to get there.  The “wise men from the east” were actually from the Parthian Empire, and the Euphrates River was the border between the Parthian Empire and the Roman Empire at that time.  Traditionally they have been depicted as “three kings”, but the truth is that it was probably a very large procession with a strong military escort.  Parthia and Rome fought many great wars over the years, and even though there was temporary peace at that time, any venture into Roman territory always came at great risk.

Now, a new “sign in the sky” will be appearing over Bethlehem at a time of the year when many Christians around the world are looking back and remembering the birth of Jesus.

Once again, I have no idea if it actually means anything.

Maybe this is just another really weird coincidence.

But if it is some sort of a warning, perhaps we should be listening, because 2020 is already shaping up to be quite an ominous year.