What’s Holding Up the Market?

The Fed’s nearly-free money for financiers policies in support of the Super-Rich do not exist in a vacuum–the disastrous consequences are already baked in.

As Gordon T. Long and I discuss in our latest half-hour video program, What’s Holding the Market Up? (34 minutes), the primary prop under stock valuations are corporate buybacks, which total in the trillions of dollars since the 2008-09 Global Financial Meltdown and the Fed’s “rescue of the rich,” which continues to this day. What’s holding up the U.S. stock market? The facile answer is the Federal Reserve (“the Fed has our back,” “don’t fight the Fed,” etc.) but this doesn’t actually describe the mechanisms in play or the consequences of a market that levitates ever higher on the promise of more Fed money-for-nothing injected into the diseased veins of the financial system.

Rather than risk capital in productive investments, U.S. corporations have borrowed trillions of dollars and used the cash to buy back their own shares. The Fed’s suppression of interest rates has incentivized stock buybacks in several ways:

1. When it’s cheap to borrow billions, the biggest bang for the buck is to use the borrowed bucks to buy back shares, which creates an illusion of growth as per-share sales and earnings both rise as shares are withdrawn from the public market.

Presto-magico, the company appears to be more profitable, and so its valuation based on its price-to-earnings ratio (P-E) adjusts higher, even though revenues and earnings have remained stagnant.

2. If a corporation piles up cash, it becomes an attractive target for acquisition. The way to avoid being taken over is to pile up debt (borrow money or sell corporate bonds, swapping debt for equity) and use the funds to buy back shares. As the corporation’s remaining shares soar in value, the company can use its own shares to acquire rivals.

These perverse incentives are the heart of the Federal Reserve’s policies, as depicted here: as real economic growth has slowed, the Fed’s largesse of cheap money has flowed into corporate buybacks because that’s what’s incentivized. 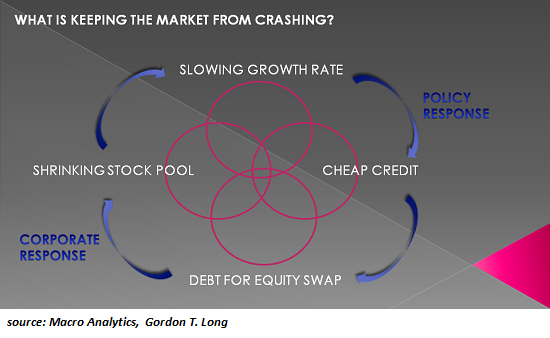 The Fed’s nearly-free money for financiers policies in support of the Super-Rich do not exist in a vacuum–the disastrous consequences are already baked in. As Gordon’s chart shows, Fed policies effectively replace capitalism (investing capital productively and accepting risk) with creditism, a debt-dependent speculative system that transfers risk to the Fed and the taxpayers (i.e. profits are private, losses are socialized). 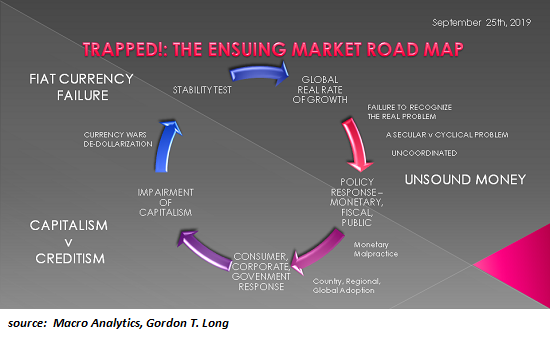 Needless to say, this doesn’t end well, as expanding credit and borrowing to fund speculation and consumption inevitably ends in a currency crisis that devalues the currency for everyone, rich and poor alike.

There’s much more in our video discussion: