What Will Americans Do If Our Country Is Invaded By Foreign Armies? 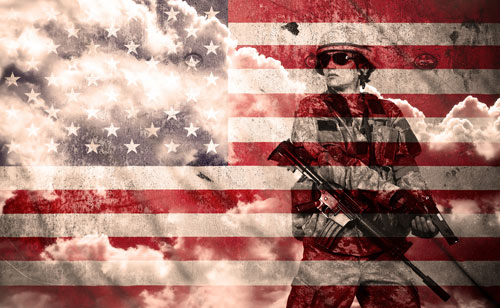 This article is a continuation of How an Attack on America Would Probably Begin: Possible Courses Of Action By Foreign Military Powers

In the last article we introduced the concept of an invasion by a foreign coalition on American soil.  Sure, we have all seen “Red Dawn” and other films that characterize an invasion by a foreign power or powers, and it is understandable that it is Hollywood.  That being said, what will happen in the United States if an invasion does occur, from the perspective of its citizenry?  Will there be a resistance, and if so, where?

We covered some potential actions of aggressor nations.  Hopefully everyone agrees on the fact that if we are invaded, the resources (in the form of food/crops, minerals, oil, and livestock) will be sought after.  Let’s turn our concentration of focus to geography, the second most important feature after human demographics.  Fortunately the United States is large and occupation will be extremely difficult.

The problem is twofold for an aggressor: how to kill off 90% of the population and enslave the rest without irradiating the whole shebang and obtaining only a Pyrrhic victory.  Firstly, let’s take a look at this photo that breaks down firearms ownership state by state: 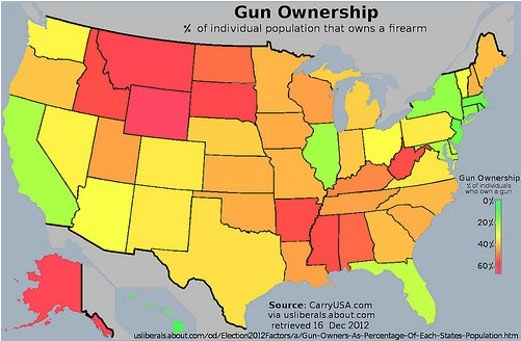 The way to make this photograph understood more readily is to take it further within your home state and multiply that percentage by the actual population of the state.  This will give you a “raw” number to estimate.  You can probably add about 10-15% to those numbers, as there will be plenty of weapons not recorded within the system.  Keep in mind: some states, such as Montana, are huge in area with a big percentage number, but the entire population of the state is just over a million people.  Twenty percent of California means a lot more guns than 60% in Montana.

Next, find those big cities in your home state that will probably be taken out, such as Washington, D.C., or New York City.  There are a number of different sites that allow you to enter in a city and the size of a weapon used against it to estimate the ring of destruction and the fallout patterns.  You can use these tools to come up with an idea of what will remain in your state after the initial strikes have been completed.

Geography has a huge say in the equation.  As I have mentioned in previous articles, the area of Northwestern Montana where I live is extremely remote; however, it holds a high level of strategic importance.  The East-West rails here for rail freight is a key crossing area of the Continental Divide.  Also, the Flathead Valley can be turned into a huge staging point for air operations with only minimal modification to existing airfields.

The mountainous regions of the United States will be areas that resistance elements will form up, hopefully with the aid of/aiding our own military.  The Appalachian Mountains, the Blue Ridge Mountains, the Catskills, the Rockies of Colorado and Montana will be areas where citizens will gather, hide, and stage bases of operations to conduct reconnaissance and fight.  There are many urban locations of strategic importance (such as Indianapolis and New Orleans) that an invader can’t really afford to bomb that would also become centers of resistance.

A factor that also comes heavily into play is the time of the year that all of this is initiated.  Food larders and supplies are highest just before the wintertime, and the “tail” end month of winter with the first two months of spring are “shortage” months.  Traditionally there are hiatuses with campaigns to allow for the harvest in the fall and the planting in the spring.  Another factor is energy: as the winter draws to an end, fuel supplies such as oil and coal will not be in such high demand, and supplies will be on the rise.

The largest question has to do with the human factors: a desire to defend, the resolve to stick it out for a long period of occupation, and the shortages of men, materials, and supplies that may weaken the resolve of the citizenry.  There will probably be a great outpouring of people from the urban and suburban areas into the remote and rural areas.  The vast, open areas of the Midwest will be very difficult for us to hold onto, but fighting will most likely be conventional, as both sides will not want to destroy the nation’s breadbasket and a large portion of domestic oil production.

What may also be a factor to consider is the percentage of the alien population here illegally that will turn against the citizenry.  An angry “fifth column” that is equated more to a sea or flood of humanity can do a great deal of damage.  Surely their sympathies would lie with their countries of origin, if they were here illegally.  Once again, this will pose a major problem in the border states of Texas and the Southwest.

We have no way of monitoring what is currently coming across our borders, let alone what has crossed over in the past five decades or so.  As many readers have mentioned, a tremendous amount of materials (firearms, suitcase nukes, and so forth) have undoubtedly found their way across the borders (Southern and Northern) to be cached and used in a future operation or invasion.

The swamps, mountains, and forests will be paramount to any resistance that is undertaken.  During the Revolutionary War, there was that “3%” estimate of actual resistance.  Things will be a little different this time, as there are technological hurdles to overcome, such as drones, cameras, satellites, and other “niceties” in a society where almost everyone has their own little tracking “chip” in the form of a cellular telephone right in their pocket.  During the initial ouster of Viktor Yanukyovich in Ukraine the government was utilizing the cell phones to find out who was gathered and protesting their actions.

A fight would definitely be a long-term contest with the potential for years before either side secured a victory.  We will also discuss and explore what our own government would do in the event of an invasion: whether they would fight it or further enable it, the latter being the more probable of the two choices.  Your views and opinions on such possibilities are both welcomed and valued.