What The Crypto Crash & Stock Market Plunge Have In Common 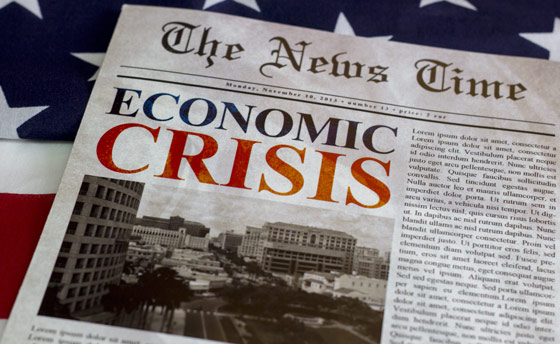 Today saw Jerome Powell sworn into office as the new Chairman of the Federal Reserve, replacing Janet Yellen. Looking at the sea of red across Monday’s financial markets, Mr. Powell is very likely *not* having the sort of first day on the job he was hoping for…

Also having a rough start to the week is anyone with a long stock position or a cryptocurrency portfolio.

The Dow Jones closed down over 1,200 points today, building off of Friday’s plunge of 666 points. The relentless ascension of stock prices has suddenly jolted into reverse, delivering the biggest 2-day drop stocks have seen in years.

But that’s nothing compared to the bloodletting we’re seeing in the cryptocurrency space. The price of Bitcoin just broke below $7,000 moments ago, now nearly two-thirds lower from its $19,500 high reached in mid-December. Other coins, like Ripple, are seeing losses of closer to 80% over the same time period. That’s a tremendous amount of carnage in such a short window of time.

And while stocks and cryptos are very different asset classes, the underlying force driving their price corrections is the same — a change in sentiment.

Both markets had entered bubble territory (stocks much longer ago than the cryptos), and once they did, their continued price action became dependent on sentiment much more so than any underlying fundaments.

The Anatomy Of A Price Bubble

History is quite clear on how bubble markets behave.

On the way up, a virtuous cycle is created where quick, outsized gains become the rationale that attracts more capital into the market, driving prices up further and even faster. A mania ensues where everyone who missed out on the earlier gains jumps in to buy regardless of the price, desperate not to be left behind (this is called fear of missing out, or “FOMO”).

This mania produces a last, magnificent spike in price — called a “blow-off” top — which is then immediately followed by an equally sharp reversal. The reversal occurs because there are simply no remaining new desperate investors left to sell to. The marginal buyer has suddenly switched from the “greater fool” to the increasingly cautious investor.

Those sitting on early gains and looking to cash out near the top start selling. They don’t mind dropping the price a bit to get out. So the price continues downwards, spooking more and more folks to start selling what they have. Suddenly, the virtuous cycle that drove prices to their zenith has now metastasized into a vicious cycle of selling, driving prices lower and lower as panicking investors give up on their dreams of easy riches and increasingly scramble to limit their mounting losses.

In the end, the market price retraces nearly all of the gains made, leaving a small cadre of now-rich early investors who managed to get out near the top, and a large despondent pool of ‘everyone else’. 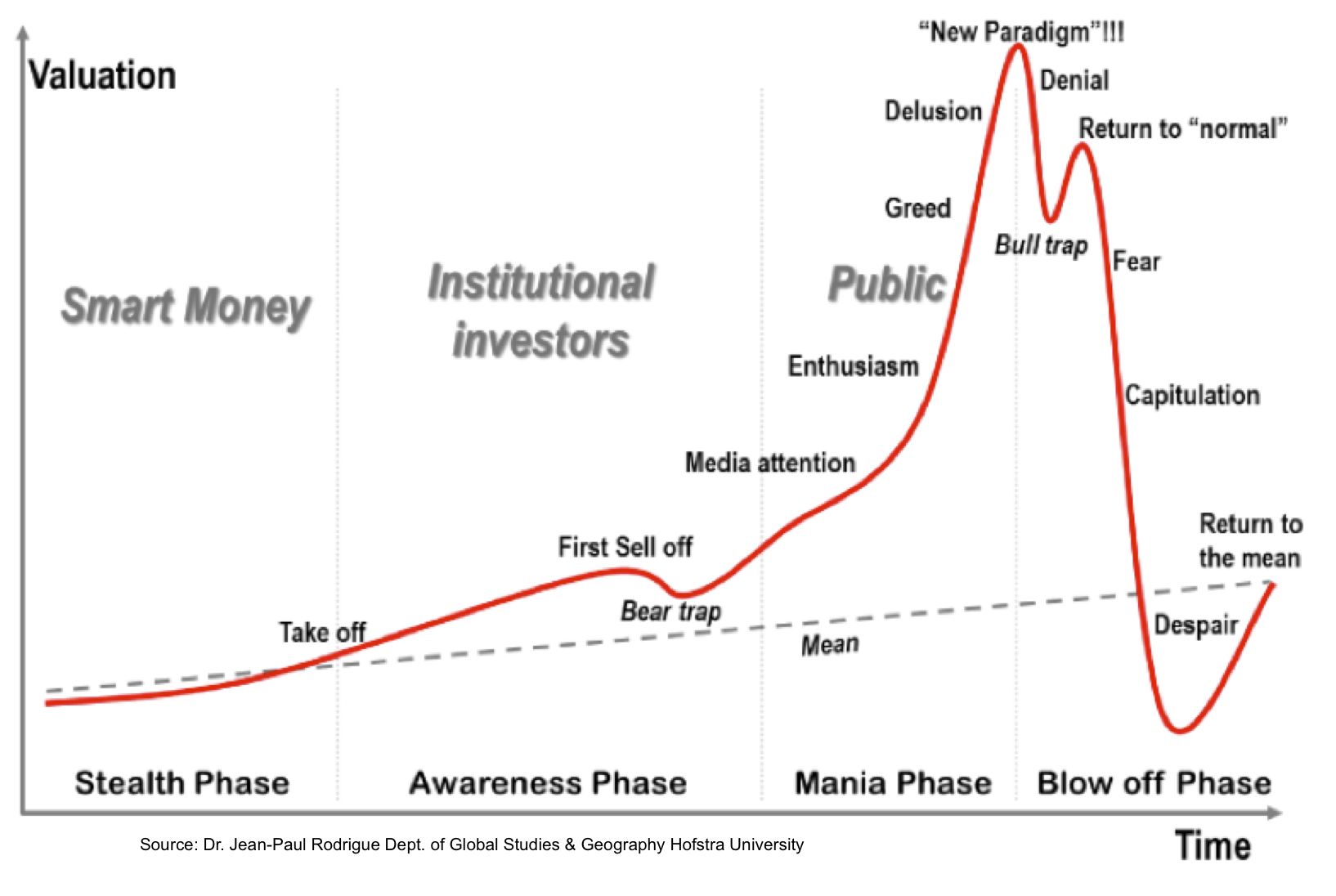 And we’re seeing it play out in real-time now in both stocks and cryptos.

Just a month ago, the Internet was replete with articles proclaiming the new age of cryptocurrencies. Every day, fresh stories were circulated of individuals and companies making overnight fortunes on their crypto bets, shaking their heads at all the rubes who simply “didn’t get” why It’s different this time.

Here at PeakProsperity.com the demand for educational content on cryptocurrencies from our audience rose to a loud crescendo.

We did our best to provide answers as factually as we could through articles and webinars, though we tried very hard not to be seen as encouraging folks to pile in wantonly. A big reason for this is we’re more experienced than most in identifying what asset bubbles look like.

After all, we *are* the ones who produced Chapter 17 of the The Crash Course: Understanding Asset Bubbles:

To us, the run-up in the cryptocurrencies seen over 2017 had all the classic hallmarks of an asset price bubble — irrespective of the blockchain’s potential to unlock tremendous long-term economic value. Prices had simply risen way too far way too fast. Which is why we issued a cautionary warning in early December that concluded:

So, if you’ve been feeling like the loser who missed the Bitcoin party bus, you’ve likely done yourself a favor by not buying in over the past few weeks. It is highly, highly likely for the reasons mentioned above that a painful downwards price correction is imminent. One that will end in tears for all the recent FOMO-driven panic buyers.

And now that time has shown this warning to have been prescient in both its accuracy and timeliness, we can clearly see that Bitcoin is following the classic price trajectory of the asset price bubble curve. The chart below compares Bitcoin’s current price to that of several of history’s most notorious bubbles: 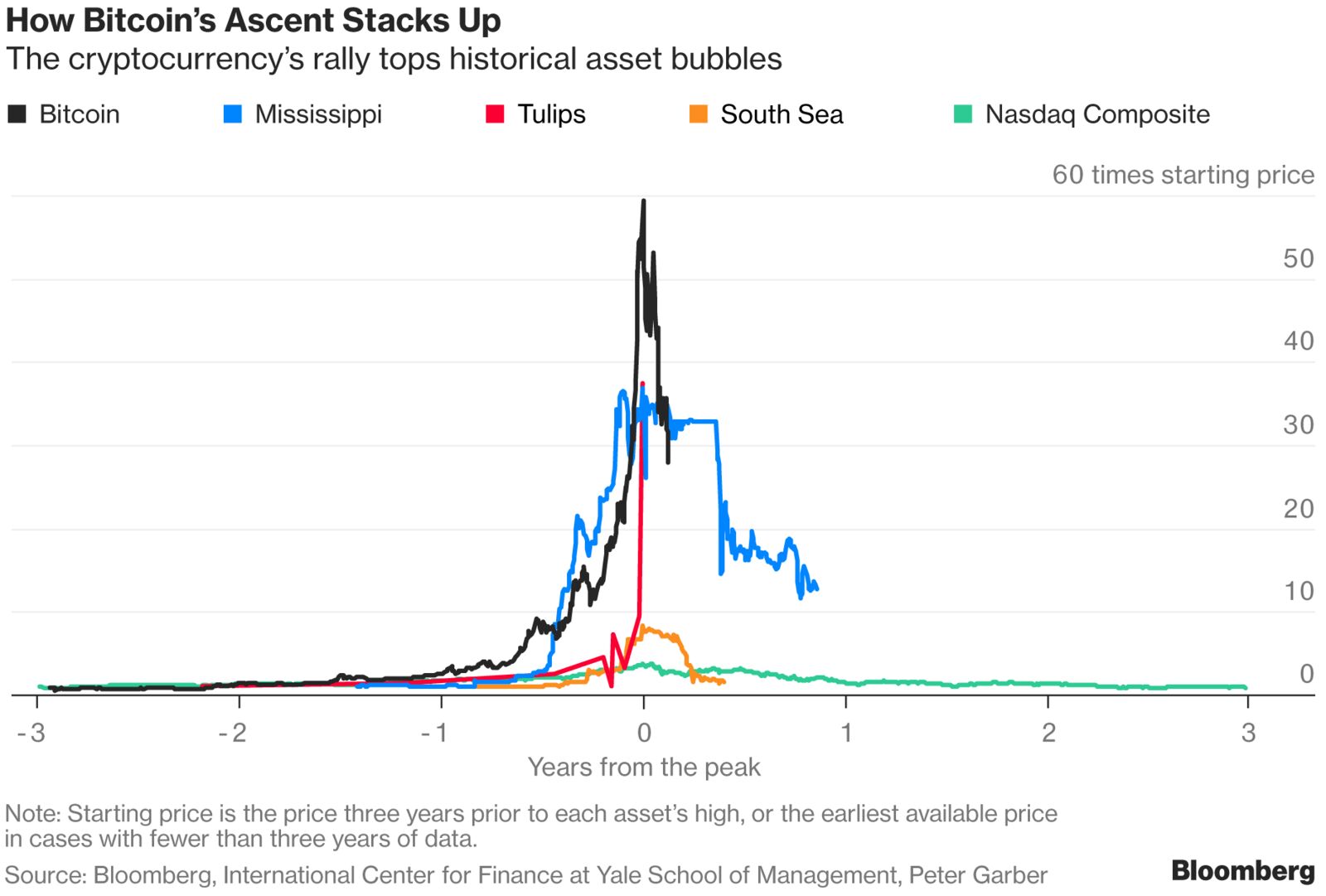 This chart (which is from Feb 2, so it doesn’t capture Bitcoin’s further decline below $7k) shows that Bitcoin is now about 2/3 of its way through the bubble life-cycle, and about half-way through its fall from its apex.

Projecting from the paths of previous bubbles, we shouldn’t be surprised if Bitcoin’s price ends up somewhere in the vicinity of $2,500-$3,000 by the time the dust settles.

Despite the extreme drop in the stock market over the past two days, any sort of material bubble retracement has yet to begin — which should give you an appreciation of how overstretched its current valuation is.

Look at this chart of the S&P 500 index. Today’s height dwarfs those of the previous two bubbles the index has experienced this century.

The period from 2017 on sure looks like the acceleration seen during a blow-off top. If indeed so, does the 6% drop we’ve just seen over the past two trading days signify the turning point has now arrived?

Crazily, the carnage we’ve seen in the stock market over the past two days is just barely visible in this chart. If indeed the top is in and we begin retracing the classic bubble curve, the absolute value of the losses that will ensue will be gargantuan.

If the S&P only retraces down to the HIGHS of its previous two bubbles (around 1,500), it would need to fall over 43% from where it just closed today. And history suggests a full retracement would put the index closer to 750-1,000 — at least two-thirds lower than its current valuation.

How Spooked Is The Herd?

As a reminder, bubbles are psychological phenomena. They are created when perception clouds judgment to the point where it concludes “Fundamentals don’t matter”.

And they don’t. At least, not while the mania phase is playing out.

But once the last manic buyer (the “greatest” fool) has joined the party, there’s no one left to dupe. And as the meteoric price increase stops and then reverses, the herd becomes increasingly skittish until a full-blown stampede occurs.

We’ve been watching that stampede happen in the crypto space over the past 4 weeks. We may have just seen it start in the stock markets.

How much farther may prices fall from here? And how quickly?

History gives us a good guide for estimating, as we’ve done above. But the actual trajectory will be determined by how spooked the herd is.

For a market that has known no fear for nearly eight years now, a little panic can quickly escalate to an out-of-control selling frenzy.

Want proof? We saw it late today in the complete collapse in XIV, the inverse-VIX (i.e. short volatility) ETN that has been one of Wall Street’s most crowded trades of late. It lost over 90% of its value at the market close:

The repercussions of this are going to send seismic shockwaves through the markets as a tsunami of margin calls erupts. A cascading wave of sell-orders that pushes the market further into the red at an accelerating pace from here is a real possibility that can not be dismissed at this point.

Those concerned about what may happen next should read our premium report Is This It? issued over the past weekend.

In it, we examine the congregating perfect storm of crash triggers — rising interest rates, a fast-weakening dollar, a sudden return of volatility to the markets after a decade of absence, rising oil prices — and calculate whether the S&P’s sudden 6% rout is the start of a 2008-style market melt-down (or worse).

Make no mistake: these are sick, distorted, deformed and liquidity-addicted bubble markets. They’ve gotten entirely too dependent on continued largess from the central banks.

That is now ending.

After so many years of such extreme market manipulation finally gives way, the coming losses will be staggeringly enormous.

The chief concern of any prudent investor right now should be: How do I avoid being collateral damage in the coming reckoning?

Click here to read ‘Is This It?’, Part 2 of this report (free executive summary, enrollment required for full access)