What is This Mysterious Object That Washed Ashore in South Carolina? 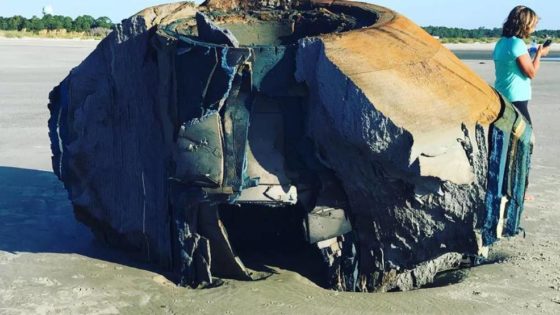 A large mysterious object washed ashore on South Carolina’s Seabrook Island last week, and no one seems to know exactly what it is.

The Lowcountry Marine Mammal Network (LMMN) was the first to notice, posting a photo on Facebook of a “mysterious object that washed ashore”.

According to LMMN officials, the object’s appearance is deceiving: It looks like it is made out of concrete, but it actually has a soft and foam-like exterior.

Commenters on the LMMN Facebook post have been speculating about what the object might be. Guesses include parts of a UFO or satellite, a buoy, or a dredge pipe float. Some suggested it was refuse from a government munition dumping site.

Town leaders came out to investigate and promptly removed the object, according to comments by LMMN.

As of now, officials have not commented on what the object might be, or where they took it.

In June, the Charlotte Observer reported a mystery object made of metal washed ashore at Corolla in North Carolina. Its use and origin were never reported.