What If Electricity Was Only for Rich People? 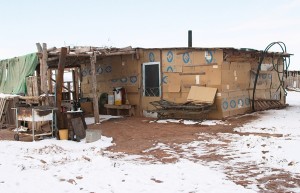 What if electrical power in the home was only for rich people? What about heat? What about running water?  What if that divide between the rich and the poor could be delineated by who had the ability to turn on light at the flick of a switch and who did not?

Many people worry about an event like a solar flare that would wipe out electrical power, casting us back about 200 years.  We’d have no refrigeration, no transportation, no climate control and no lights. But in that situation, we’d all be in the same boat. No matter how wealthy you are, any unprotected electrical items would still be useless.

What if the real threat was simply that no one could afford to pay the electric bill?  What if prices escalated to the point that it was a choice between food and electricity?  What if, home by home, the lights went out across America?

Across the world, the prices of electricity are rising dramatically.  Customers have been warned that they will face increases.  Smart meters have been installed nearly everywhere.  Many places are instituting time-of-day pricing, making it only affordable to do your laundry in the middle of the night.  The UK has announced that people can expect rolling blackouts beginning sometime next year and their power costs have risen 31% since 2010.

Part of the reason Americans will face higher prices is President Obama’s War on Coal.  (In his own words he promised to bankrupt the coal industry.)  If Obama can’t close down power producers through the front door, he does it through the back door, via the EPA.  Even though the climate change theory through CO2 emissions has been completely debunked, the EPA is still passing draconian laws to reduce our “carbon footprint” and thus raise the prices on power.   Obama has shut down 8 coal mines across 3 states, and he and his buddies at the EPA have plans to scale back production at over 200 coal-powered plants via a regulatory assault.

The United Nations carbon taxes have forced many areas across the globe into power monopolies.  While small companies will go out of business struggling to meet the new regulations, General Electric (a large Obama contributor) has received a waiver, exempting them from meeting these new standards.

In providing the likes of GE with a waiver, the White House is greasing the skids for a giant consolidation of the energy industry, shutting down competition and creating artificial scarcity – thereby driving up costs for the American people.

The deliberate deindustrialization of America has nothing to do with protecting the environment. Whereas the competitiveness of America’s energy industry is being crippled by the EPA and the White House, China and Mexico are building dozens of new power plants every year which fall well short of the clean-burning technology standards adhered to in the United States.

This is about the implementation of the UN’s Agenda 21, which operates under the guise of “sustainable development” yet is clearly part of a stealth agenda to centralize control over energy, bankrupting America in the process as part of the move towards a crony system of one world governance.

We are facing dramatic global increases in the prices of food, water and power.  This will serve to widen the divide between the rich and the poor and effectively end the middle class.

In Jackson County, Alabama, for example, the price of water bills has quadrupled, making an average monthly water bill over $300.  Lizzie Bennett writes that many residents no longer have running water in their homes because of these exorbitant bills.

“Many people have opted to buy drums of water from petrol stations rather than pay their ever increasing bills. They use these drums of water for drinking, washing and in their portable toilets which can be seen dotting back yards across the area, the modern version of the outhouse. They pay a fee to a sanitation company to remove the waste. It’s cheaper than letting the city take care of it.”

A popular culture comparison would be with the movie, The Hunger Games.  In the movie, citizens of the Districts were relegated to cooking over open fires and lighting their rooms with candles.  No one had transportation or power.  They were not allowed to hunt to supplement their meager food allotments and in the heroine’s District, they were not allowed to use the coal the area was rich with.  Uniformed “peacekeepers” patrolled the districts to ensure that the rules were strictly adhered to and that the excruciating poverty was the standard for all residents.

However, when the main characters went to the Capitol, a mere train ride away, it was another world, with advanced technology, power at the touch of a button and enough food at each meal to feed a family for a week. The Capitol glowed with industry, cleanliness and light and the difference of living standards was like the difference between night and day.

The increased prices of modern day necessities can be used as leverage for many types of governmental control.  Consider Agenda 21, right from the website of the UN Department for Sustainable Development.

Agenda 21 is a comprehensive plan of action to be taken globally, nationally and locally by organizations of the United Nations System, Governments, and Major Groups in every area in which human impacts on the environment.

To make sure that’s totally clear:  A plan of action.  Got it.  To be taken globally…okay – everyone must participate.  In every area in which human impacts on the environment….yep, that covers everyone and everything in the entire world.  It’s a way to take over the world that sounds so warm and fuzzy that people will pay money to get in on it!

So in true Agenda 21 fashion, wiping out power to outlying regions rich with their own natural resources will be a great way to corral the hungry cold masses into the megacities that have been designed for us. According to alternative journalist Susanne Posel, “Humans are now being compared to invasive species that commandeer territory, disburse indigenous wildlife and destroy the planet in the process…The move out of rural areas and densification of urbanized centers is being pushed in the American mainstream media as the answer to the devastating effects of humans on the environment. The elimination of suburban areas as compact cities become inundated with more people, there is a need to reinvent these centers to accommodate these swelling numbers.”

Not only will the loss of affordable utilities help round people up geographically, it will perpetuate a massive die-off as people living in homes that were not designed to function without electrical power succumb to many different fates.  People will freeze to death in their homes in the winter, burn to death or die of carbon monoxide poisoning as they try to keep warm in homes not designed with proper chimneys and ventilation, perish of food poisoning as they consume items that have been left unrefrigerated, die from being unable to keep life-saving medications at the proper temperature to prevent spoilage or contract diseases like typhus from improper sanitation when water no longer flows from the taps.

So, what can we do to maintain our independence as the powers that be try to return us to serfdom through limiting our access to affordable necessities?

First you must learn to provide for many of your necessities alone.  Grow food, join a co-op, raise chickens and rabbits.  Even a small salad garden in a kitchen window can help you to offset high food prices.

Second, reduce your dependence on the power grid.  Use rain barrels to collect water, direct the gray water from your washing machines to reservoirs, hang your clothes to dry, and use solar lighting whenever possible.

Find other ways to stay warm.  This can be difficult if you rent but it can still be done.  Consider making modifications to allow for the use of portable wood heaters, look into different types of camping heaters and make your plans and purchase your supplies well before you need them.  Learn how to safely store fuel for these secondary devices. Invest in battery operated C02 monitors (and extra batteries). Get sleeping bags with a warmth rating for low temperatures, consider a small tent where you and family members can sleep in your living room to pool body heat, and stock up on cold weather clothing like hats, fingerless gloves, long underwear and heavy sweaters. Find ways to insulate and separate one main living area off from the rest of the house by closing doors, hanging curtains in doorways, etc.

Watch the prices of your utilities.  As the prices begin to rise, more and more people will be unable to pay their bills and eventually their power will be shut off.  Check your bill each month and as prices increase, use less power. Redefine necessities.  You can hand wash your clothing, cook on a woodstove or outdoor grill and can foods to preserve them instead of relying on a large chest freezer. None of these are the way things are commonly done these days, but if you can manage to keep power on for the most basic necessities, like running the pump for your well, running a refrigerator, and maybe powering up a laptop, you’ll be living in luxury in comparison to the neighbors who now have no power, no heat and no running water.

Prep, prep and then prep some more.  The end of the American way of life is upon us.  Stock up on beans, bullets and bandaids. If you’re new to the idea of prepping, check out some sites like Ready Nutrition (especially the 52 Weeks to Preparedness Series), Survival Blog, The Survival Mom, and SHTFplan. The clock is ticking.

Instead of a huge, life-changing calamity, consider that it may be the culmination of many small events, rising prices and lower incomes, and the deliberate erosion of our self-sufficiency by those who would control us that cause TEOTWAWKI. (The End Of The World As We Know It)

Contributed by Kimberly Paxton of www.TheDailySheeple.com.

This content may be freely reproduced in full or in part in digital form provided full attribution is given to the author and a link to www.TheDailySheeple.com is included.