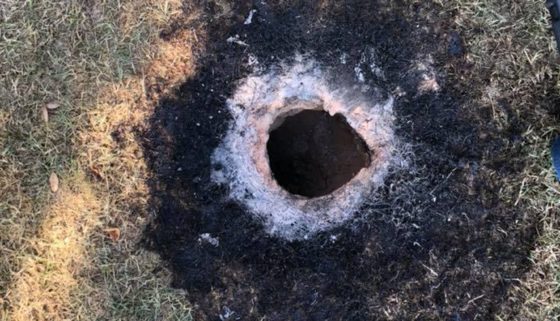 Experts are still trying to determine the cause of flames that shot out of a hole in the ground in Midway, Arkansas, last month.

The fire in the hole seemingly erupted spontaneously, shooting out flames of up to 12 feet high.

He told the Springfield News-Leader what he saw when he got to the scene:

“When I got there, there were flames 8 or 9 feet high shooting out of a hole about 2 feet in diameter. It burned that way for 30 to 45 minutes before it went out.”

Tucker told Motherboard that although news reports have said the flames initially reached 12 feet high, he never saw them get to that level. The fire burned red-orange, at about two feet in diameter, Tucker said.

Why didn’t Tucker take pictures of the fire? “With a fire like that, you don’t know what it is, so you don’t put yourself in danger,” he told Motherboard.

Before the fire retreated into the hole, it shrunk to a flame about waist high for a few minutes, Tucker said:

“Then it just went down the hole and went out. For a little bit, there was just a little bit of glow of fire down in the hole.”

Mickey Pendergrass, the county judge in Baxter County, told the Arkansas Democrat-Gazette that officials are still investigating the mysterious Midway hole, but one possible suspect has been cleared:

“As far as the spiritual Satan goes, we’ve ruled that out. He didn’t come up and stick his pitchfork in the ground and blow that hole out.”

The volleyball-sized hole has been there for at least 10 years, according to a man who used to mow the grass on the private property along Arkansas 5.

“It’s kind of like an old groundhog hole, burrow, or armadillo’s,” Pendergrass said. “But it’s been there a long time.”

What caused the fire remains a mystery, however.

So far, the following possible causes of the fire have been ruled out:

Could someone have started the fire intentionally? It is possible, Pendergrass said:

“What kind of fuel did they use to make it so clean and no soot and no damage? And what was used to strike the fire to start with? There are just too many questions for it not to have been done on purpose, whether it was for fun or for giggles. Somebody will talk someday and have to brag about it, and then we’ll find out who did it.”

Soil samples were taken from the hole, and officials hope that analysis will provide clues. If gasoline or anything else was put in the hole, or if groundwater contamination caused the fire, the soil should help experts determine that.

It is possible, however, that we will never know what caused the hole to burst into flame.

“I’ve never seen it before. I hope I never see it again,” Tucker said. “What it was, I have no idea.”