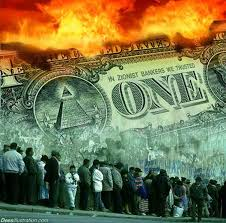 In financial circles, it is widely acknowledged that the Federal Reserve was about to raise interest rates, but has since changed course and decided to hold firm.

Why? Because currencies are tanking all across the globe, and a stronger U.S. dollar – a double-edged sword – is making export goods more expensive and hurting international business.

Welcome to 2015, the year of the currency wars. Things are about to get volatile, so hold on.

Wall Street bears are warning that a crisis is near, according to CNN Money:

The bears build their case that a crisis is near [based] on four factors: falling oil prices, stagnant wages, the “two-edged sword” of a strong US dollar and big trouble abroad.

“Earnings and economic activity are actually weakening, not strengthening,” says James Abate, chief investment officer at Centre Asset Management, which manages over $8 billion. “The growth outlook, to us, is deteriorating.”

Only a short time ago, the Swiss decoupled from the Euro, signalling trouble ahead and sending markets spiraling. Now Greece is back in debt trouble, and several other European nations are vulnerable. This will spread further. The damage could be severe, depending upon what plays out.

Growth in China is slowing. The Swiss National Bank ignited a “currency war” this month after a surprise move. The European Central Bank is throwing a life raft to its nations drowning in deflation, and Japan is already deflating.

On top of that, Greece just elected a leader almost certain to cause tension with other European leaders and tensions are flaring up again between Russia and the Ukraine.

“Everyone seems to be falling or faltering in some way,” abroad, says Matt Kerkhoff, research director at Dow Theory Letters, an online newsletter. The American economy, “cannot really outperform while all the rest are in shambles.”

Remember, everything is, and has been for decades, interconnected. As SHTF quoted earlier this week,

“At a basic level, all markets are increasingly integrated — if Wall Street sneezes, New Zealand is likely to catch a financial cold.”

Now it figures that if Wall Street catches the flu, the world might catch the plague. And so, Federal Reserve monetary policy is hinging on international conditions during a time of stormy seas.

Right now, the Mexican Peso and Brazilian Real are at the tipping point, with the peso at its lowest point since 2009 and the real at the lowest point in 10 years!

Meanwhile, economic experts are debating whether or not the euro can still be saved, or is doomed to collapse as European states are internalizing control of their economies and repatriating gold to weather the storm should the entire continent be consumed in the swell.

Since last July, the value of the dollar has soared by 15% versus the world’s major currencies, making U.S. exports less competitive in global markets.

The dollar’s strength is being fueled by multiple factors. Lower oil prices have caused currencies in Russia, Mexico, and other energy-dependent economies to fall precipitously. Since the middle of last year, for instance, the Russian ruble has lost roughly half of its value versus the dollar.

Monetary policy by the European Central Bank is also playing a role. In an effort to jump-start the continent’s ailing economies, the ECB announced earlier this week that it would follow in the Federal Reserve’s footsteps by buying 60 billion euros in government bonds each month over the next year and a half. Because this expands the number of euros in circulation, anticipation of the news pushed the euro’s value to its lowest point vis-a-vis the dollar in more than a decade.

Finally, actions by central banks in Canada, Singapore, Japan, and other countries suggest a deliberate attempt to manipulate exchange rates in a broadening currency war. Most recently, Canada cut its benchmark interest rate last week by a quarter of a point, and the Monetary Authority of Singapore said this week that it would take measures to slow the appreciation of the Singapore dollar.

The net result is that the Federal Reserve has little choice but to delay an increase in interest rates. Doing otherwise would only further drive up the value of the U.S. dollar given that higher rates would attract international capital, and thereby boost the demand (and thus price) for dollars.

The combination of the returning European debt crisis and the crash of oil prices is serious enough, again, that it is determining Federal Reserve policy.

Things are that bad.

Earlier today, Michael Snyder warned that “if the price of oil stays at this level throughout 2015, We’re going to have a total financial nightmare.”

Now, the currency wars are reaching “hot” levels, and casualties are about to begin.

With the oil crisis undermining many economies and destroying well-paying job, the Euro is becoming the primary front, though the wars are being fought all across the globe.

As usual, any remaining national sovereignty and wealth among the population – and their bank accounts – will be the first to be sacrificed to stave off the crisis.

Already, Mario Draghi, the head of the European Central Bank, has told the world he will do “whatever it takes” to save the euro. According to GoldSeek.com, that means:

Draghi is willing to…

4)    Buy EU sovereign bonds despite the fact that this clearly violates the Maastricht Treaty (the treaty that formed the Eurozone).

However, what Draghi is NOT wiling to do is restructure ANY EU sovereign nation’s debt.

Time to chain down anything you don’t want them to take.