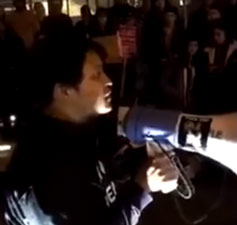 We recently warned that America is about to see unprecedented protests and rioting from coast to coast.

But don’t take our word for it.

A social justice warrior involved in the Seattle street protests tells you everything you need to know about what the future holds and lends further evidence to the notion that America sits on the precipice of widespread civil unrest.

The woman, who also claims to be a pre-school teacher, implies that it’s time for extreme measures, including but not limited to killing people, starting at the White House.

As you’ll see below, when she claims it’s time to start killing people she is most likely referring to white people exclusively. But killing isn’t enough.

If you’re white, it’s time you started kicking some of your hard-earned wealth her way, including your cash and your house:

Watch the her full speech (and then be sure to register your kids with her pre-school):

Related: Prepare For Anything – A Step By Step Guide