We Have Blown The Largest Bubble In The History Of Mankind

Were you to look at official government statistics that calculate our rate of price inflation for food, energy, clothing, and other consumer goods, you’d think that prices were as stable today as they were under the gold standard.

According to the Bureau of Labor and Statistics, the CPI (Consumer Price Index) inflation rate remains well below the Federal Reserve’s 2.5% threshold. Insofar as the government is concerned America’s core inflation rate is just 1.7%, a testament to the economic prowess of our central bank and Chairman Ben Bernanke.

And because there is no significant price rise being realized in consumer goods based on the government’s calculations, the millions of Americans dependent on disbursements like social security, disability assistance and nutritional food support will see no adjustments to their monthly stipend. And why would they? Prices aren’t rising!

According to Peter Schiff, who is well known for his dire economic warnings leading up to the crash of 2008, the government is involved in a wide array of manipulations and fuzzy-math in an effort to convince us that the price increases we’ve seen in stores, restaurants and gas stations over the last decade are merely a figment of our imagination.

“What we get from the government when it comes to inflation is not information, it’s propaganda. “

Citing anecdotal evidence because of a complete lack of transparency from the Fed, BLS and government as a whole, Schiff points to the “Big Mac Index,” which has tracked the price of a McDonald’s Big Mac at restaurant chains across the world for decades.

Because McDonald’s caters to tens of millions of customers yearly and offers food at a fairly low cost compared to others in the food service industry, it is a fairly insightful gauge of consumer activity.

According to the Big Mac Index, and contrary to the government’s claims of stable prices, since 2003 when the Federal Reserve really began cranking hundreds of billions of dollars into an already troubled financial system, the price of inflation is more than double what is being claimed.

The Big Mac has gone up by over 6% per year, yet the government claims CPI is only 2.5% per year. So something’s wrong. Either something’s changed at McDonald’s, or something has changed in the way we report inflation. And I trust a hamburger more than I trust the U.S. government.

That price [of the hamburger] went up in line with the CPI for sixteen years, and then in 2002 they started to diverge.

Look at the chart below, and you’ll see that the divergence started taking place when the Federal Reserve started expanding our monetary base after the 2002 crash (with the largest spikes occurring after the 2008 crisis) and when the U.S. government turned to tripling our national debt. 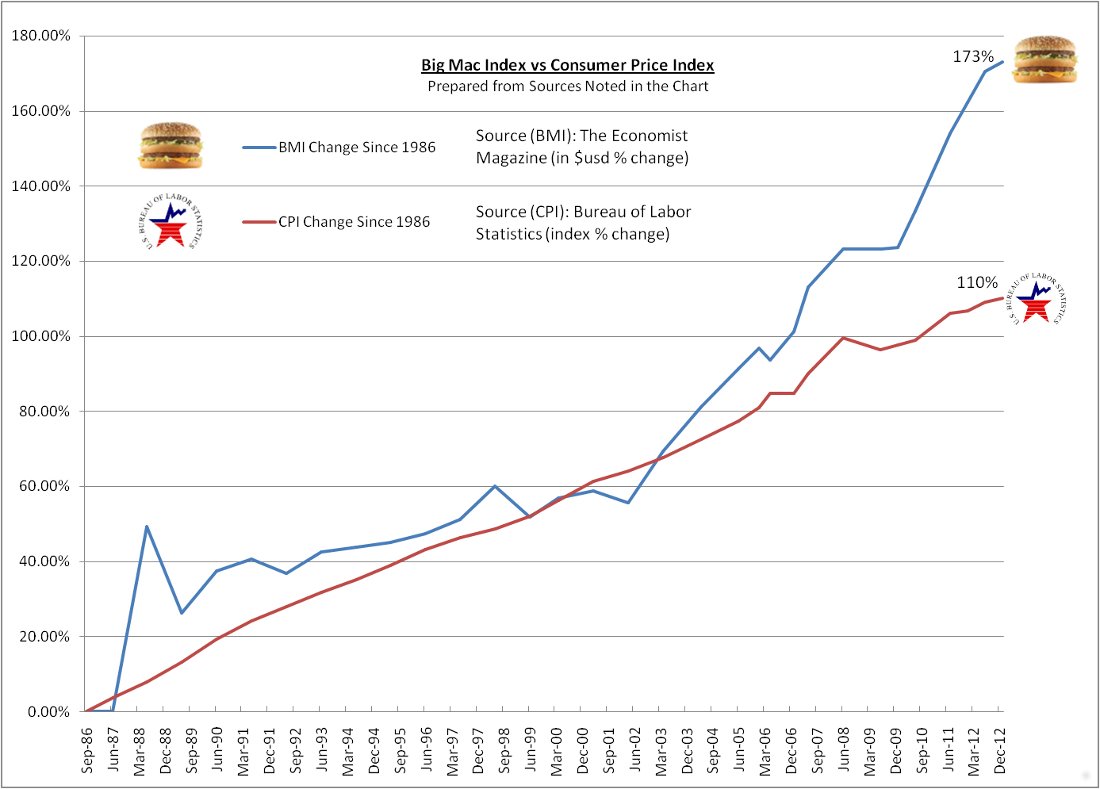 We got news from Tyson foods that showed a big drop in meat processing and pork processing, and an increase in chicken because Americans can’t afford the rising cost off food, so they’re trading down.

Look, the government is creating inflation. The money supply has exploded. The Fed’s got interest rates at zero. It’s buying $85 billion worth of mortgages and government bonds every month.

You can see it manifest itself in stock prices, in real estate prices, in bond prices… it’s all over the place.

But the government can’t acknowledge that exists, because they can’t do anything about it.

Because if the Fed takes away the cheap money, if they raise interest rates, this whole phony recovery that they’ve created will collapse and we’ll be in a worse economic crisis than 2008.

So the government cannot tell us the truth about inflation. They’re going to keep lying until people wake up.

If the government acknowledges what is happening, confidence in the economy and financial markets will be lost and we’ll have a repeat of 2008 or worse.

If the Federal Reserve stops expanding the monetary base and puts an end to the monthly $85 billion in purchases, the entire house of cards will collapse in on itself.

So, their only option is to continue on this course. But it is a trajectory that will lead to a collapse so severe that our civilization may not be able to survive it.

The inflation we’re seeing in the price of our milk, our gas, our electricity and other good and services we depend on is a symptom of a much greater problem.

We have blown the largest bubble in the history of mankind.

One day we’re going to pay for it – not with money. But, rather, it will be paid with the collateral that was used to back the loans – our lives.

Our creditors will soon come for their pound of flesh.

The government of the United States is already preparing for the economic collapse and the civil unrest that will follow.