Watch This Incredible Video And Decide For Yourself: Did Hillary Clinton Cheat At The Last Debate By Using An Embedded Tablet Device In Her Podium? 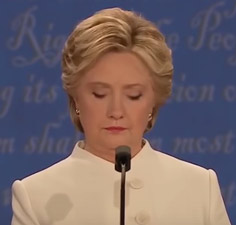 New Wikileaks documents show that Hillary Clinton, in association with the mainstream media, was given debate questions ahead of time. It’s also been rumored that the former First Lady may have used an ear piece at one of the debates, giving her a significant advantage.

The following video will leave little doubt that something just wasn’t right at the last debate. As you’ll see, Hillary, who claims she was merely taking notes, was actually reading directly off of the podium, almost as if someone was feeding her answers and bullet points.

Moreover, and quite damning, the notes Hillary was supposedly taking were were being written down with a pen that didn’t have a tip on it. So, either she wasn’t taking notes, or, she was using a stylus on an electronic device.

Watch this incredible video and decide for yourself:

For an extensive breakdown of the Wikileaks notes that add further legitimacy to the claims that Hillary’s podium is loaded with cheat-tech, we encourage you read Leaked Emails Reveal Hillary Can’t Speak for Very Long Without a Podium

Related: Leaked Email: ‘If She Wins, Hillary Will Own the Supreme Court for the Next 30 to 40 Years’ and Did You Notice the Secret Message Behind Hillary During Last Night’s Debate?