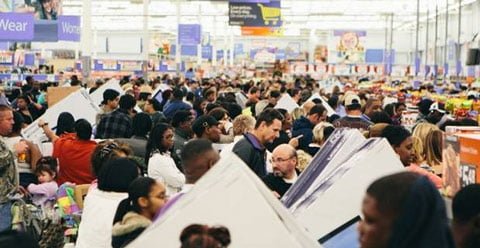 This weekend the nation’s Electronic Benefits Transfer crashed, leaving millions of Americans around the country wondering where they would get their next meal.

One woman, interviewed just minutes after she learned the system was no longer functioning, complained that she was unable to put food on the table. “How am I going to feed my family,” she asked, noting that she has six kids to feed.

There is a long-held theory that we are just nine meals from anarchy and that within 72 hours of any significant crisis which takes down our ability to conduct commerce we’d see a total destabilization of our society and way of life.

The events of this weekend have proven this theory wrong.

Should a serious crisis strike we won’t have three days.

It’ll be more like three hours, which is about how long it took panicked food stamp recipients with non-functioning benefits cards to completely raze the shelves of their local Walmarts.

Watch the following video and you’ll get an idea of exactly what to expect if and when the worst happens.

What is underneath is not pretty, and it does take much to peel away that veneer. You take your average urbanite or suburbanite and get him excessively cold, wet, tired, hungry and/or thirsty and take away his television, beer, drugs, and other pacifiers, and you will soon seen the savage within.

It will happen fast, as noted by Tess Pennington in Anatomy of a Breakdown:

As preppers are well aware, when the needs of the population cannot be met in an allotted time frame, a phenomena occurs and the mindset shifts in people. They begin to act without thinking and respond to changes in their environment in an emotionally-based manner, thus leading to chaos, instability and a breakdown in our social paradigm.

When you take the time to understand how a breakdown behaves and how it progresses, only then can you truly prepare for it.

This weekend a single system serving nearly 50 million Americans crashed, leading to panic across the country.

Now consider what would happen if the financial system was hit with a “glitch” or a cyber attack that restricted access to the bank accounts and ATM machines of 300 million Americans.

For those who think this is not a possibility, consider the words of outgoing head of the Department of Homeland Security Janet Napolitano:

Outgoing Homeland Security chief Janet Napolitano issued an ‘open letter’ to her successor warning that a cyber or physical event that knocks out the power grid will occur – and it is not a question of “if” but “when.”

When that day comes the EBT crash will look like a walk in the park.

It is for this reason that we urge Americans who have not yet done so to develop a long-term preparedness plan that includes food storage for when grocery stores are emptied, water in case utility plants are taken offline, silver and gold as a mechanism of exchange when commerce systems fail, and self defense armaments and home defense strategies for when the looters come knocking.

Failure to prepare will be nothing short of horrific.