Watch: These Are The 5 States Hillary Must STEAL From Trump: “If She’s Successful It Will All But Block Trump From Presidency” 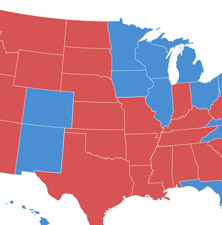 The fix is in.

If the latest flurry of emails from the Clinton Camp prove anything, it’s that Hillary’s organization has been actively manipulating and rigging the Presidential election from the get-go. We know for a fact that she colluded with Democratic National Committee to marginalize Bernie Sanders. We know her mainstream media cohorts gave her debate questions ahead of time. We know that she actively hired and organized actions in Chicago and elsewhere to make it look like Trump supporters were violent. And we know from recently released John Podesta emails that they have been tampering with polls through over sampling. We also know that dead democrats all over the country are voting in the Presidential election.

Thus, it stands to reason that if there’s any way to rig actual election outcomes either through hacking electronic voting systems or other ballot machinations, the Clinton campaign will do everything in their power to take advantage of it.

In the video below The Daily Sheeple’s Weekly Word explains that there are five key states that are actively being target for election fraud:

Get regular news updates at The Daily Sheeple Youtube Channel:

Did Hillary Cheat at the Final Debate?