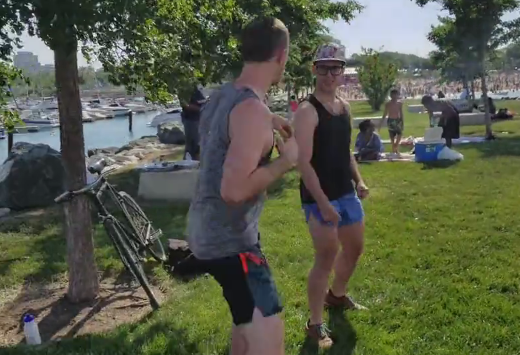 You may recall that last April, leftist social justice warriors admitted that they received a major beat down when they went up against Trump supporters on the streets of Berkeley. Following that altercation, many of them took to Reddit to complain that they were outmatched, and needed more weapons, better equipment, and even combat training.

Fortunately, we don’t have to worry about them becoming competent street brawlers any time soon.

It turns out that an “anti-fascist” group in Chicago called the “Haymaker Collective” has opened a nonprofit self-defense club, where “people, regardless of ability, can learn the skills they need to stay safe in Trump’s America.” They tried to raise $50,000 on Indiegogo for boxing gloves, bags, exercise machines, etc, but they fell short by $44,000.

According to their Indiegogo page:

So what does $6,000 buy for a bunch of pasty leftists bent on fighting back the fascist tide? This outdoor training program, which teaches them to be “harder to kill,” and is apparently free of the “hetero-normative, masculine gym culture.”

Clearly these boys mean business. I’m sure those white supremacists will be shaking in their fascist boots when they see these scrawny guys rolling around in the grass in their flowery hats. And don’t worry, those dirty Trump supporters will never learn their mad fighting skills, because “everyone is welcome accept police and anyone who is affiliated with strong right-wing groups.”

Yes, this is not a joke. These people actually think that there are conservative forces in this country that threaten to persecute them and wipe them out, and they think that their gentle training regimen is going to save them from this nonexistent threat. They also think that their training program is so great that right wingers and cops will try to infiltrate their club. It’s pretty funny, but not a joke.