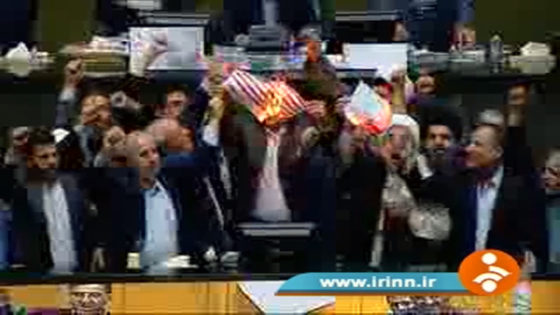 Outraged over president Donald Trump’s decision to pull the United States out of the 2015 Iran nuclear agreement, Iranian lawmakers burned an American flag picture while chanting “death to America!”  The incident took place during a recent session of Iran’s parliament, and their anger and hostility are easily recognized.

Trump’s controversial decision to pull out of the Iran nuclear agreement sparked outrage across the international community and, in particular, among his allies in Europe who have vowed to adhere to the original agreement. And Israel has already bombed Syria where they believe Iranian weapons were being stored for use.  There were at least nine fatalities due to that airstrike, likely further angering Iranian lawmakers.

Iran has been vocal about their disgust with Trump withdrawing from the agreement.

Iranian President Hassan Rouhani told a cheering crowd of thousands Tuesday that if any country decides to betray the 2015 nuclear deal, there will be “severe consequences.”  Although Rouhani didn’t specifically name the United States, he did say that Tehran is “prepared for all possible situations.” –SHTFPlan

“If necessary, we can begin our industrial enrichment without any limitations,” the Iranian President Hassan Rouhani said according to RT, echoing similar comments from the speaker of the parliament, Ali Larijani earlier on Wednesday. “Until [the] implementation of this decision, we will wait for some weeks and will talk with our friends and allies and other signatories of the nuclear deal, who signed it and who will remain loyal to it. Everything depends on our national interests,” Rouhani added.

Under the 2015 deal, Tehran agreed to curb its nuclear program in return for relief from economic sanctions. Trump’s predecessor, Barack Obama, struck the pact to try to keep Iran from building a nuclear weapon, but Trump believes the deal has “disastrous flaws.”

The United States will reimpose a wide array of Iran-related sanctions after the expiry of 90- and 180-day wind-down periods, including sanctions aimed at Iran’s oil sector and transactions with its central bank, the U.S. Treasury said on Tuesday.

In a statement on its website and a related “frequently asked questions” document, the Treasury said sanctions relating to aircraft exports to Iran, the country’s metals trade and any efforts by Tehran to acquire U.S. dollars will also be reimposed.

Trump signed a presidential memorandum reinstating US sanctions against Tehran that were waived in the wake of the deal which was signed during the Obama administration. Although Iran seems angered, especially after viewing the above video, the country doesn’t appear to be overly concerned about the likeliness of additional sanctions.