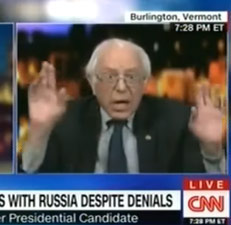 In yet another embarrassment for CNN, which President Donald Trump directly charged with being fakes news in front of a national audience last month, the network appears to have cut off Senator Bernie Sanders after he attempted to make a joke about the mainstream news channel.

CNN Anchor Erin Burnett: He [President Trump] says he know nothing about it and hasn’t seen any of these reports. Is that a problem?

Sanders: Well, I don’t know. Maybe he was watching CNN fake news… what do you think?

Sanders: That was a joke.

CNN’s Erin Burnett: I know it was a joke… You don’t buy what he said, obviously.

Sanders: Are we on?

While on FAKE NEWS @CNN, Bernie Sanders was cut off for using the term fake news to describe the network. They said technical difficulties!

CNN promptly responded, claiming that they did not cut the Senator off:

According to the fact checkers, Bernie Sanders’ audio link was not intentionally cut off within seconds of joking that CNN was fake news, because according to CNN, they brought him back after the commercial break, after which there was no further mention of the “F-word.”

In short, Politifact and CNN don’t want you to believe your eyes or your ears, because what you saw and heard in the video clip above didn’t actually happen the way it happened.