Watch: Clinton Town Hall Questions Totally Rigged: “I Can See Why they Gave You This Question” 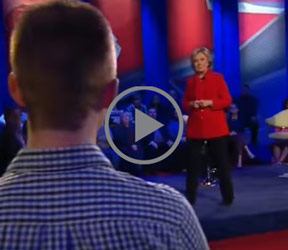 You may think that political town halls are open air events where regular people can have meaningful, candid and impromptu discussions with candidates. But as you’ll see from Hillary Clinton’s latest CNN town hall meeting, nothing happens by accident and the candidates are often well aware of exactly what questions “random” audience members will ask them.

Clinton is known for controlling the entire conversation and perspective, especially when she’s in front of a camera, but this time she got totally busted.

In the following video you’ll see a visibly nervous Brett Rosengren stand up to ask Clinton a question. Despite it being a slow travelling softball with no actual substance whatsoever, the question itself is unimportant. It’s what Rosengren says before the question that has raised eyebrows:

“I can see why they gave you this question…”

“I just wanted to know which of our previous presidents has inspired you most and why.”

Why would someone else be giving Clinton a question when Rosengren was supposed to come up with one of his own?

“I can see why they gave you this question” Was it not the asker’s own question? #DemTownHall

“I can see why they gave you this question?” Is that what he said. What does that mean? Did “they” prepare the questions?

Very odd and revealing moment –> Last questioner said, “I can see why they gave you this question” #DemTownHall pic.twitter.com/Zcx3u356Sf

“I can see why they gave you this question” – Young actor outs staged democratic townhall. #demtownhall #demdebate https://t.co/J7oGNvRayQ

@SalenaZitoTrib Lots of folks I follow noticed that too. Must be nice to have the game rigged in your favor, eh?

@SalenaZitoTrib Such setup. Much corruption. Busted.

Is it any wonder why Donald Trump is refusing to play the mainstream media game anymore? Like the Hillary town hall, he knows that favored GOP candidates will have been given their softball questions in advance while he’ll be staring down curve balls all night.

Elite Insider: ‘Trump Will Not Be President… Hillary Will Win’

Why Does Hillary Clinton Always Cackle with Glee at Violence, Horror, and Death?

Ready for Hillary… to Take Your Guns