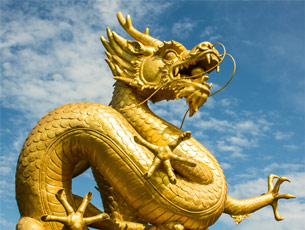 “China… across the board… is preparing for something big in currency markets.”

This October may see the beginning of the end for the U.S. dollar as the world’s reserve currency. Twice every decade the International Monetary Fund meets to discuss their Special Drawing Rights (SDR) currency basket. Currently comprised of the dollar, Japanese Yen, British Pound and Euro, if China has their way a few months from now, we may well see the Chinese Yuan take its place among the world’s most trusted currencies.

U.S. Treasury Secretary Jack Lew says, “China isn’t ready for currency reserve status,” and would certainly like to see the Chinese blocked from entry, preserving the dollar’s status as the world’s go-to currency and primary mechanism of exchange for global international trade.

But while Lew and his predecessors have presided over the largest growth in national debt in world history, the Chinese have been strategically positioning, much like the United States did in the early 1900’s, to not just become the world’s largest economy, but to be the super power of the 21st century.

Forget for a moment what’s being touted by analysts, forecasters, politicians, and financial officials who say China is not ready. Focus instead on the actions being undertaken by China and you’ll understand why Chinese President Hu Jintao says that the dollar is a product of the past.

Already we are seeing China and Russia hoard gold with Chinese demand skyrocketing in the past give year… China is both, the world’s largest gold producer and biggest importer… so not only are they accumulating gold by the truck load, but not one ounce produced is leaving their shore.

China… across the board… is preparing for something big in currency markets.

The world has an unease about the dollar system… President Hu of China said ‘the dollar is a product of the past.’

There was a time when the U.S. dollar was backed by gold. This backing helped to solidify it as a currency that could be trusted on the open market. Today, however, for all intents and purposes, the dollar is backed by absolutely nothing.

It is this weakness that the Chinese aim to exploit and that’s why they have been actively stockpiling thousands of tons of gold in recent years. But this is only part of the story.

In addition to their physical gold holdings, the Chinese have been using a secret gold accumulation strategy that no one is talking about :

The headlines for gold these past few years have only focused on physical gold accumulation by China, Russia and Eastern central banks. But what they have missed is a 7,000 year-old strategy that China is doubling down on.

According to data compiled by Bloomberg, in 2013 asset purchases by Hong Kong and [Chinese] mainland miners increased to a record $2.2 billion.

China is buying gold mines at a record… something completely missed by both, the mainstream investor and even the gold analysts who tend to only focus on the bullion sales, which haven’t been disclosed officially since 2009.

Although, according to Bloomberg, based on trade data the physical bullion stockpile has likely tripled since then.

China, who is aggressively buying gold, would spark an event if it disclosed how much gold it has stockpiled.

But imagine the true disclosure when you add up all their deposits… not just in China, but offshore. $2.2 billion is equivalent to 46 metric tons of physical gold… but when buying gold deposits in the ground this could be upwards of 5,000 metric tons.

And that is just one year of record mine buying from China.

It’s been rumored that China may disclose those gold holdings ahead of the IMF’s decision this October in an effort to prove to the world that their currency is not only worthy of admission into the SDR basket, but that it is more trustworthy than the U.S. dollar itself.

The winds of change are blowing and the Chinese will soon be taking the helm of the global economy. They know a major event is coming and they have been preparing for it by acquiring the one asset that has survived the test of time as a mechanism of exchange.

For those desperately trying to figure out where they should be putting their money before the next major market event takes shape, consider following their strategy.

For more information on how to position yourself for the next global paradigm, visit: http://www.futuremoneytrends.com/china