Watch As Car Plows Through Protesters In Minneapolis… Did Driver Act In Self Defense? 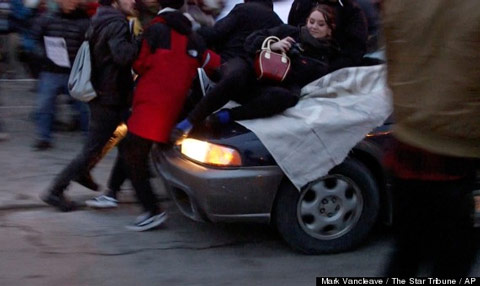 A panicked driver in Minneapolis was attempting to make his way through a crowd of emotionally-charged protesters when he decided to make a break for it.

The driver, presumably panicking because of the crowd that had gathered around his vehicle, reportedly honks his horn and then hits the gas.

Most were able to get out of the way, but one woman was struck by the vehicle and then trapped underneath its left-front tire.

The woman was taken to a local hospital and treated for non-life threatening injuries.

The driver was detained by police and is reportedly being questioned, but no charges have been filed.

Raw Video via The Daily Sheeple:

Most mainstream news reports show only the above clip of the incident, claiming that the driver displayed a shocking disregard for human life. But to understand the motivations of the driver, one must look at what transpired before he drove into the crowd.

Extended Video Shows What Happened Moments Before The Driver Hit The Gas:

The protesters certainly have a right to be on the streets, but was the driver also justified in his actions?

At first glance it looks like the driver simply took off without regard for human life. But, the extended video shows an angry mob gathering around the vehicle yelling, kicking his tail lights and banging on the car. The driver attempts to get away, but is met with another crowd in front of him as the crowd behind him continues to damage the car.

It was at this point that the driver decided it was time to get away.

Should the driver have stopped and let the mob continue to attack his vehicle?

Further, should the driver be charged with a hit and run in this instance?

Or, did he act in his own defense when he tried to exit a situation that was, from his perspective, bordering on the real possibility of injury or death?