WARNING: The Other Preppers: “We Are Your Worst Nightmare and We Are Coming…”

Editor’s Note: At last count there were roughly three million people in America who are preparing for far-from-equilibrium events and disasters. But not all preppers have the same ideas about their strategic plans, stockpiles and strategies. While most are taking steps to insulate themselves from catastrophe by stocking their pantries, developing skills and learning to protect their homes from marauders should the worst befall us, others are putting together plans and organized syndicates whose plan is to strike at those who had the forethought to get ready in advance.

Tyler Smith, a recent guest on the show Doomsday Preppers, is one such ‘prepper’ who is taking a controversial approach to end-of-the-world preparedness.

“We are your worst nightmare, and we are coming,” is the warning Smith has given to those who think they’ll be living the simple life in a post-collapse world.

You may have prepared for starving looters, and can likely fend off small parties of people trying to take what you have, but are you prepared for a coordinated attack from a heavily armed band of pillagers?

You better be, because you can be assured they are preparing for you. 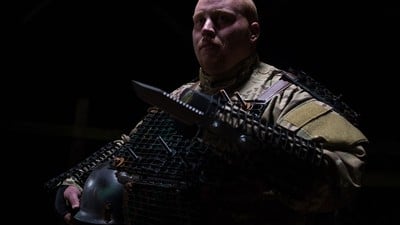 If there was ever a case study on why preppers should be prepared to defend their supplies, the upcoming episode of National Geographic’s Doomsday Preppers would provide a perfect example.

“We’re not in it to stockpile. We’re in it to take what you have and there’s nothing you can do to stop us,” Tyler Smith says. “We are your worst nightmare, and we are coming.”

Smith, 29, is the leader of Spartan Survival. The group has more than 80 dues-paying members. Smith founded the organization in 2005 to train and prepare others on survivalism.

So, not only would someone with supplies need to worry about everyday commonplace looters, they would need to be concerned about Smith and his band of merry marauders, whose survival plan seems to hinge on overwhelming force against those who have spent years gathering supplies and planning for a secure and peaceful existence.

National Geographic appears to have chosen Smith as a poster boy to give the preparedness-minded a bad name.  I wouldn’t set your DVR for this one – excerpts seem to indicate a show full of bad advice and ill-thought-out “strategies” from someone who refers to himself as “a professional deer hunter”. He refers to himself as the “apex predator” in his area, based on his home-made body armor and other survival gear.

Most preppers, Smith says, are concerned with marauders taking their supplies. It’s not an unfounded fear, he says.

“We are those people,” he says. “We’ll kick your door in and take your supplies. … We are the marauders.”  (source)

Smith has gotten a lot of bad comments from the prepping community and has responded with this literate response on his facebook page [Author’s note: Smith’s Facebook page was removed today]:

idk what is worse the people that cant tell the difference between entertainment/tv hype? or the people that are commenting way beyond things I said talking about killing my family and raping my wife and or killing me preemptively I said I would do whatever is necessary to survive and if that means kicking in doors then yes that is the guy I will be. get a fucking life you troll keyboard warrior pieces of shit its reality tv if you thought entertainment wasn’t a possibility swallow your own 12 gauge barrel. Armor was meant to be for tv use only notice my modern plate carrier in pics above. and just so yall know your feeding into another show I have airing and your filling my pockets so for my house payments sake and new truck payment keep talking! if you thought anyone in there right mind would say that for free and not be expecting a reward you all are fools…as for my personal skills I know I can get better i know physical training is a top issue that’s all time consuming objectives and I am definitely working on it. better yet live your live prep and get ready because the end is coming. if you think your morals will survive the end times good luck and watch the whole episode and turn off selective hearing.

Let’s make one thing clear – Smith is not a prepper.  He is not representative of what we do.  He’s an embarrassment to the preparedness community.  He is a thug, plain and simple.  He’s an out-of-shape criminal who is afraid to get caught, so he’s waiting for the breakdown of law and order to commit the crimes he so clearly wishes to perpetrate, without fear of spending time in prison.

Preppers, beware.  Just because someone calls themselves a prepper, doesn’t mean that they have the same morals and values as the rest of us.  Unsavory people like Smith and his Spartan Survival group are out there, and they’re planning to come for our supplies.

This is what we prepare for.  And we’re ready for you, Mr. Smith.

Please feel free to share any information from this article in part or in full, giving credit to the author and including a link to this website and the following bio.

Recommended Video: You Are A High Value Target