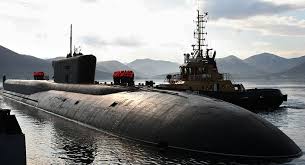 Sea trials for the upgraded Borei-class nuclear submarine are underway in Russia, as the country prepares its military might for a war.  Borei-class submarines carry 16 Bulava submarine-launched missiles as their primary armament and may also fire cruise missiles from torpedo tubes.

According to RT, the Knyaz Vladimir is the first submarine built as an upgraded Borei-A variant, which has improved communication systems, lower noise levels, and better crew cabins. It was laid down in 2012 and launched in November last year. According to bmpd, a respected Russian defense blog, on November 28 the submarine was deployed for sea trials by its producer, the Sevmash shipyard base in Severodvinsk. She is expected to enter service sometime next year.

RT further reported that there are three Borei-class submarines – the Yuriy Dolgorukiy, the Aleksandr Nevskiy and the Vladimir Monomakh – which are currently on active duty in the Russian Navy. They were commissioned between January 2013 and December 2014 and are regularly used as platforms for Bulava SLBM test launches. Four other Borei-A-class submarines are in construction, with plans for two more previously announced. A Borei-B variant featuring a new propulsion system and other upgrades is being developed by the Rubin Design Bureau, the lead designer of the class.

Russia continues to prepare their military might for a war. The country has also been accused of looking specifically for a reason to start a third world war.

In addition to asking for a declaration of martial law, Ukrainian President Petro Poroshenko has also been gathering with his top military leaders. Poroshenko is pledging that Ukraine will not take any “offensive” military actions, but he also says that they are ready to defend against any attacks from Russia.

The Russians are accusing Poroshenko of manipulating this crisis in order to pump up his flagging approval ratings for the upcoming presidential elections. There is a very real possibility that Poroshenko could lose, and he is desperate to stay in office.

Of course, the Ukrainians are blaming Russia for everything, and Poroshenko says that what happened on Sunday “was an act of war”… –Michael Snyder, The Economic Collapse

As Russia ramps up for a war, most Americans are content to sit back and allow the authoritarian political elites to steal their money and use it to enforce their leftist ideas of a “perfect” society on them. A hellish future awaits if humanity refuses to see the truth.