WAR: Israel Says They Have ‘No Choice But War’ With Hamas 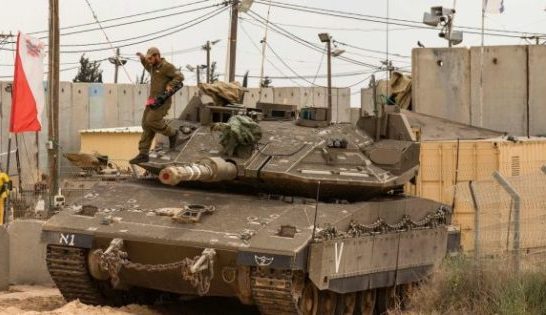 Israel has said that they have “no choice but war” with Hamas after “exhausting all options.” Israel’s defense chief made the remarks that war could be on the horizon amid reports the Israeli Defense Forces are amassing tanks along the Gaza border.

“Wars are only conducted when there is no choice, and now there is no choice,” Defense Minister Avigdor Lieberman told the parliament. Apparently, anything less than the “toughest response” to Hamas is not being considered as Tel Aviv had “exhausted the other options,” according to a report by RT.

As the IDF stationed approximately 60 tanks and armored personnel carriers near the Palestinian border in what may be the largest military deployment since 2014’s Operation Protective Edge, speculations of a war and fear of bloody conflict have crept up.

The stationing of tanks and other armored vehicles on the border with Palestine occurred after an exchange of fire last week, in which a rocket from Gaza hit the southern Israeli city of Beersheba, damaging a house, while another fell into the sea near Tel Aviv. The Israeli Air Force retaliated, killing one Palestinian and injuring several others, according to a report by RT.

Lieberman said that the blame for the escalation is solely on Hamas, a Palestinian militant faction that rules Gaza. He claimed that there is no popular uprising in Gaza and that Palestinians taking part in large-scale protests are on Hamas’ pay. However, Palestinians say they are protesting of their own free will to counter Israeli oppression. Over 200 Palestinians have been killed, including medics and journalists, and more than 22,000 injured since border protests dubbed the Great March of Return, which began back in March.

The clashes [during the Great March of Return] were violent and dozens lost their lives.  Avi Dichter, a senior member of Benjamin Netanyahu’s ruling Likud Party, made the highly controversial comment when speaking to Hadashot TV news on Monday afternoon of the violence taking place between Israel and the Palestinians.

Dichter, who is also the former director of Shin Bet internal security service and Minister of Internal Security was quoted as saying, “The IDF has enough bullets for everyone,”  by The Times of Israel. “I think that ultimately, the [sic] means that the IDF prepared, whether non-lethal or if needed, lethal, in cases where it’s justified by the open-fire regulations — there’s enough ammunition for everyone.” -SHTFPlan