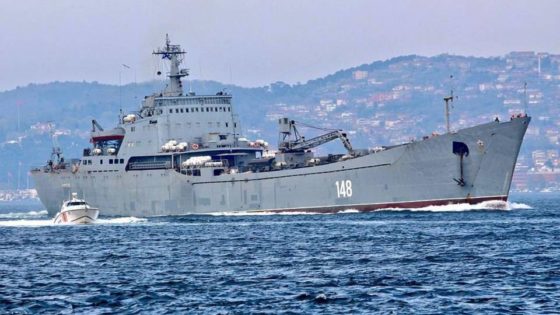 Russia sent two warships carrying tanks and other military supplies to Syria in the wake of the United States-led attack on Damascus for an alleged chemical attack. It looks like the West’s attack accomplished one thing: a stronger Syria/Russia alliance.

The boats were spotted on The Bosphorus (the straight of Istanbul) on Sunday. This delivery of military supplies from Russia comes on the heels of an attack on Syria led by US president Donald Trump, the United Kingdom, and France.  Russian president Vladimir Putin has also since warned that the world would experience “chaos” if Syria was attacked again.

The West is alleging Bashar al-Assad, Syria’s leader used chemical weapons on civilians to justify military attacks on Damascus and Homs.  But interestingly enough, those strikes occurred the day before international investigators were scheduled to arrive to conduct a thorough inspection of the site.  –SHTFPlan

Russia continues to allege the chemical attack used as reasoning by the West to bomb Syria was fabricated.  Based on all the evidence currently gathered, it appears to be a false flag, making Russia correct, and the US guilty of producing massive amounts of pro-war propaganda.

The news is rife with the Syrian airstrikes and the theatrical narrative: the united coalition of brave allies against the despotic Assad to secure the blessings of liberty, etc., etc. The reality: The U.S. threw more than 100 missiles against soft Syrian targets with Britain firing rockets from four aircraft as France flew planes around and cruised the waters with a few ships. The target (a suspected but not verified chemical weapons facility) was destroyed…before chemical weapons use, or manufacture could be verified. Once again, the Western Hegemony “showed” that bad ‘ol puddy-tat, that anti-Saudi Arabian, anti-Petrodollar Assad…showed him that his “Clorox Bleach” assault on mannequins as verified by white hat “Light-Brite” technicians would not be tolerated! “Mission accomplished!” in the words of US President Donald Trump. –SHTFPlan

Russia’s supplies are making their way to Syria while the US expects us to believe they bomb people out of the goodness of their hearts.

The Russian President has responded furiously to the strikes in Syria, which followed the deadly chemical weapons attack in the city of Douma that left dozens dead. According to a statement released by the Kremlin, Putin told his Iranian counterpart that the strikes had undermined chances of a political resolution to the conflict. “Vladimir Putin, in particular, stressed that if such actions committed in violation of the U.N. Charter continue, then it will inevitably lead to chaos in international relations,” the statement read.

So, as you may deduce, there is plenty to be seen behind the scenes while “Operation Clorox” was conducted in Syria. Examine the information before you take a drink of that Grape Kool-Aid and blindly fall for the rhetoric. The Deep State is fully in control and moving ahead with their own agenda. They just “wagged the dog” this past weekend, and not only did most Americans fall for it…all Americans paid for it as well. Eventually when the Globalists’ plans escalate further into war, payment will be rendered in lives.-SHTFPlan

As the US hints that there won’t be any more strikes on Syria, and with Russia sending even more reinforcements, Bashar al-Assad can all but claim victory over the US-backed terrorist “rebels.”