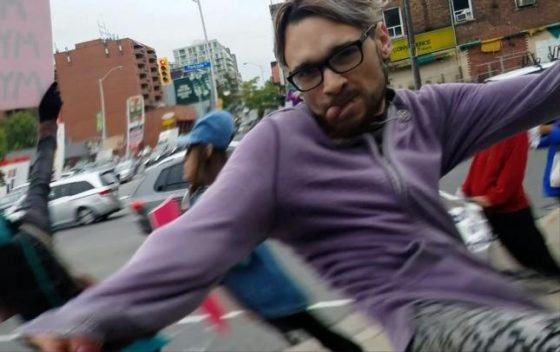 A video depicting a pro-choice male hair stylist roundhouse kicking a female pro-life activist is going viral. Jordan Hunt, who attacked pro-life advocate Marie-Claire Bissonnette on Sunday at a Life Chain in Toronto, has been fired for violently kicking the woman.

Immediately after the brutal attack, the man claims he meant to kick the woman’s phone, which would still have been assault considering she was holding it at the time.

The shocking 46-second clip by Marie-Claire Bissonnette, youth coordinator with Campaign Life Coalition, went viral after it was published on LifeSiteNews Tuesday, reaching number 8 on YouTube on Wednesday, with over 500,000 views as of publication, and sparking widespread discussion on social media.

After a brief discussion with Bissonnette about a hypothetical situation, he appears to get agitated she won’t simply agree with him, so he roundhouse kicks her in the shoulder knocking the phone out of her hand. He also tore a Campaign Life ribbon off her jacket before running off, Bissonnette said.

A representative from the salon Hunt worked for confirmed they had let him go over his violent attack. “We’re four strong women here,” she said according to Life Site News. “We don’t condone any kind of violence… Everybody has their own opinion and different ways of thinking, but violence is not the answer. He won’t be stepping his foot through the door again.”

Hunt’s profile has been removed from the Noble Studio 101’s website, but according to it, he is writing a book on “The Hippy Swamp Witch, a guide to natural living,” and developing his own product line. He was formerly employed at Coupe Bizarre on Queen Street West.

Hunt’s Instragram account had been shut down Wednesday night and Bissonnette says she intends to press charges for the unwarranted attack. Bissonnette has filed a report with the Toronto Police, but according to police spokesperson Katrina Arrogante, the details of the incident are “on file and the investigation is ongoing. No arrests have been made at this time.”