Video: Whites Hunted As Race War Erupts On American Streets: “Yeah They White, Get Their Ass!” 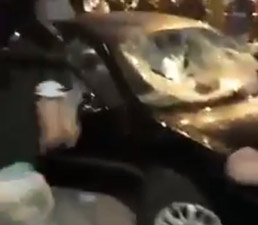 Editor’s Note: A race war has erupted. As summer began an elite special forces insider warned of serious civil unrest, noting that “everything is right for things to go very wrong.” As summer progressed we’ve seen political skirmishes in San Jose, violent attacks on law enforcement officials across the country, calls by African Americans to racially segregate whites from blacks,  and now outright racial targeting and beatings of people for no other reason than the white color of their skin. Things are getting worse, and it is only a matter of time before the violence expands to major cities all over the United States.

#BlackLivesMatter rioters target whites: "They beating up all the white people." #Milwaukee pic.twitter.com/G85jnYtd3k

The clip shows angry rioters chanting “black power!” before asking “is they white?” as cars slowly drive past.

“Yeah they white!” states someone else, prompting the mob to run towards the vehicle.

“Yeah they white, get their ass!” screams another.

“Hey they beatin’ up every white person!” exclaims another rioter.

The footage appears to show the mob attacking cars and trying to drag out the drivers.

The footage then cuts to an upper floor window before the person shooting the video states, “I think they just beat some white bitch ass for no reason – they bust open the window.”

Local reporters were also targeted for violent assaults, including a Milwaukee Journal-Sentinel reporter, who was “thrown to the ground and punched”.

WTMJ was forced to pull its reporters from the ground altogether because of violent threats from the mob.

In another clip, rioters are seen burning down a gas station while chanting “black power!”

Another clip shows a man trying to justify the violence by claiming that rich people don’t give blacks enough money.

Rich people not giving us money so we burn down our own neighborhoods. #BlackLivesMatter logic. #Milwaukee pic.twitter.com/Nc9z9JGZJF

The unrest began after police shot and killed an armed man with a “lengthy criminal record” who was carrying an illegal firearm that had been used in a burglary.

Last night’s chaos will do nothing to change the view that ‘Black Lives Matter’ is a violent, domestic hate group, but despite this recurring theme, the movement has received positive coverage from the mainstream media and has been supported by President Obama himself on numerous occasions.