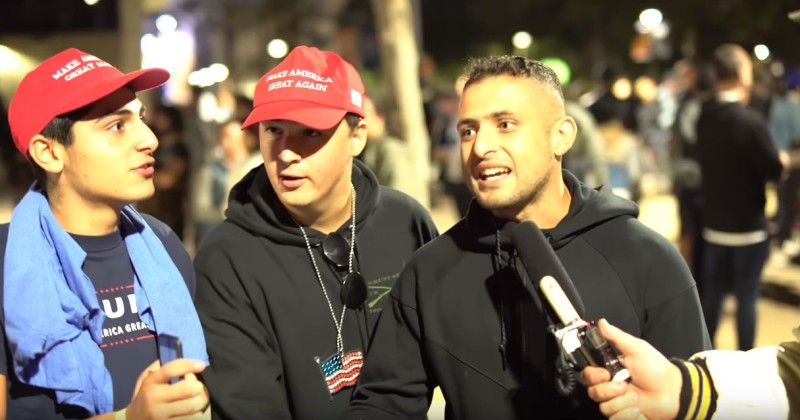 This article was originally published by Paul Joseph Watson at Infowars.com

This video of a far-left protester who is obsessed with “white supremacy” being schooled by a group of Trump-supporters with immigrant parents is the funniest thing you’ll see for a while.

Austen Fletcher visited the scene of the protest against a Milo Yiannopoulis speech at Cal State Fullerton earlier this week and hilarity ensued.

The Communist argues that anyone who supports Trump inherently believes in his immigration policies, which are based around reinforcing “white supremacy”.

The conversation then turns to three young student Trump supporters, who the Communist says “exist in a system of white supremacy,” before one of the students announces “we’re Armenian”.

“Can I point out my parents were born in a Muslim country,” adds the other student.

“My parents are from Mexico, bro, adds the third student, “they came here, they came legally, it took 15 years, my Dad finally became a citizen.”

He then confirms that he supports immigration and building a wall, before the Communist asks him, “Do you care about the people in Mexico right now who are suffering and who want to come here?”

“But there’s a way, they come legally,” responds the Mexican student.

He then explains, “I grew up in the ghettoist parts of Costa Mesa, and I have seen minorities that take advantage of frikkin welfare and it sucks….my Dad taught me to value hard work and not to victimize yourself so I firmly do not believe that there is a white supremacy system of oppression that’s going against me.”

“I’m not rich….but I work my ass off and I know I can improve my own life,” he concludes, leaving the Communist speechless.

The video is hilarious because it once against emphasizes how privileged white liberals often lecture working class Trump supporters about how racist they are when in reality, leftists are just using minorities as human shields for their political agenda.

Watch the full video from the Cal State Fullerton protest below.