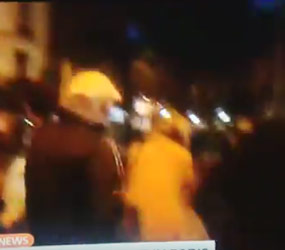 In the immediate aftermath of the Parisian attacks that left over a hundred people dead and scores injured we warned that this is just the beginning. With the massive influx of unidentified immigrants swarming Europe it is impossible for officials to separate refugee from terrorist. Police have already found weapons caches in refugee camps and this morning it was all but confirmed that terror cells are planning additional attacks.

In a raid that left two terrorists dead and seven arrested, the New York Times reports that the wife of one of the Parisian attackers detonated a suicide vest as police closed in:

Two people died in the raid, including a young woman who detonated an explosive vest, and seven people were arrested. It was not clear if the suspect was there.

The raid began around 4:15 a.m. Paris time, when special police forces, backed by truckloads of soldiers, cordoned off an area near the Place Jean Jaurès, a main square in St.-Denis not far from the Stade de France, where three attackers blew themselves up on Friday.

Inside the apartment, on the third floor of a building on the Rue du Corbillon, at least five suspects were holed up. One of them, the woman, opened fire and then killed herself; a man — “another terrorist,” the Paris prosecutor, François Molins, said — died from a combination of gunfire and the detonation of a grenade.

According to officials at least two suicide bombers detonated themselves in crowded venues during last Friday’s attacks.

We now know that those suicide bombings weren’t the only ones planned. We also know that extremist Muslims who mean to do harm in Europe are armed with automatic weapons, grenades and the explosives necessary to build suicide vests that were, up until recently, used exclusively in predominantly Islamic countries.

European officials continue to argue about how to deal with the middle east migrations, but some like Poland and Hungary have already closed their borders and are refusing to accept any more “refugees.” In France, where the majority of the population seemed to be accepting of the migrations prior to the attacks, the government has sealed the border under emergency powers.

Intelligence organizations in Europe have begun widespread sweeps across the continent arresting those suspected of having ties to the Parisian attacks or other terrorist activity.

European citizens are scrambling for self defense armaments. Panic in Germany left shortages of non-lethal pepper spray and Austrian firearms dealers report that all long guns have been sold out.

After the events last week in Paris it is difficult to see a bipartisan solution that doesn’t lead to revolt in Eastern Europe and Scandinavian countries like Sweden where disagreeing with immigration policy is now considered racism.

As has often been the case throughout history when native citizens are backed into a corner, revolution and war aren’t far behind.

The whole of Europe and America just witnessed the dangers of unchecked immigration. As more attacks are launched in Europe, Russia and the United States, the various ideological factions will begin to turn on each other. And the Islamic State, with its millions of supporters, will be laughing all the way to the theocratic caliphate that aims to impose Sharia law wherever possible and overtake native populations through demographic jihad.

The Prepper’s Blueprint: How To Prepare For Any Disaster

ISIS Posts Photo Of Bomb That Brought Down Russian Plane