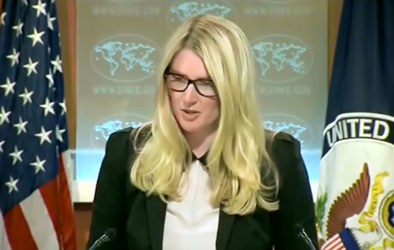 An analysis of remarks delivered by U.S. State Department deputy spokesperson Marie Harf suggests that the Ebola epidemic currently sweeping the world may not necessarily be a naturally occurring event.

At an official U.S. State Department press briefing that included reporters from the New York Times, CNN and the Associated Press Ms. Harf, reading from prepared comments, referred to the spread of the deadly virus as an “Ebola attack.”

The comments raise concerns that a weaponized form of the virus may have been used by a rogue terrorist organization.

Reporter: Can we talk about Ebola… Could you talk about precautions… What’s going on?

Marie Harf: So let me just give you a few facts. Obviously we’ve confirmed that a U.S. citizen died in Nigeria after contracting the virus in Liberia. He had traveled to Nigeria while infected with the virus. Embassy officials have been informed of the case and are working with local authorities.

At least two additional United States citizens have been infected…

The U.S. Missions in the affected areas have distributed messages to U.S. citizens regarding the Ebola attack and those missions are closely monitoring the situation and continue to keep American citizens informed of what’s happening.

In the press briefing, recorded on July 30, Harf also says that according to the CDC there is “no significant risk” of Ebola spreading in the United States, even though the CDC warned this morning that there are serious concerns about possible airborne transmission of infectious material.

Raw video via The Daily Sheeple: