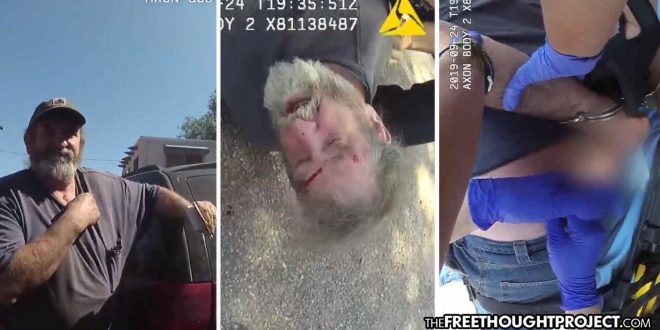 EDITOR’S NOTE: “Trigger Warning!” If you are still a believer in the left vs. right paradigm lie and have not yet realized the truth that the police enforce the will of the ruling class on others using all methods of force, up to and including death, then this article will upset you. Laws are nothing more than the opinions of politicians backed by the threat of force and violence by the hired “enforcers”.  Still think you’re free?

Cops in Colorado have a rather disturbing track record when it comes to compliance during detainments. Family and friends of Elijah McClain learned this the hard way two years ago after McClain — who had broken no law — was detained, tackled to the ground, and forcibly sedated with ketamine before he succumbed to the force and drug, and died. Seven Reycraft, 60, experienced a similar interaction with police that same year, but fortunately for Reycraft he did not die and now he is fighting to change the way this drug is used on people.

Body camera footage from Reycraft’s interaction with police was recently released, showing the extent police will go to in order to enforce traffic infractions with no victim. On that day in 2019, police targeted Reycraft for extortion, claiming he had committed a minor traffic infraction. When Reycraft disputed their claims, police attacked the man before forcing medics to give him several injections of sedatives.

“Looking back on it, I think it’s absurd, and it should’ve never happened. It didn’t need to happen,” Reycraft told KDVR, telling them he was injected for questioning authority.

“They didn’t like the fact that I was challenging their professionalism, and I was,” Reycraft said, explaining that he refused to id himself to cops during the traffic stop. According to Colorado law, if you are pulled over while driving, a police officer can require you to show your license, insurance, and vehicle registration. However, Reycraft didn’t feel that the stop was warranted, so he contested it.

As it is the job of a police officer to extort citizens for traffic stops, up to and including the use of violent and deadly force to achieve said extortion, when Reycraft contested, he was subsequently tackled to the ground and handcuffed, with officers cutting open his forehead in the process.

“Every time they wrenched my arm, it hurt a lot, but I was more incensed by what I was witnessing,” Reycraft said.

Naturally, when questioned about the use of force, the Manitou Springs Police Department issued a statement claiming they have the right to use violence against citizens to enforce the law.

“For the safety of our community, public safety employees, and everybody involved, it is standard police practice to implement a reasonable use of force within the confines of the law when someone is resisting detention.

“The MSPD takes any use of force extremely seriously, and as a team, reviews every use of force incident by our officers to ensure that we are remaining vigilant and focused on the betterment of our community,” said Alex Trefry, a spokesperson for Manitou Springs.

During the detainment, Reycraft was certainly agitated, but he presented no threat to the officers involved who had him surrounded and in handcuffs. Nevertheless, police directed paramedics to forcibly sedate the man — over a minor traffic infraction.

As the video shows, the paramedic asked the officers if Reycraft had been behaving erratically, to which the officers responded, “no, he’s one of these people that doesn’t want to give his name and (he’s saying) he has the right not to and all this other stuff.”

So, for being one of “those people,” cops were going to drug the man against his will.

The paramedic gave Reycraft two shots of the sedative Versed before proceeding to inject ketamine into the 60-year-old man’s butt. Reycraft was handcuffed, hogtied, strapped to a gurney face down, and already had been injected with two doses of Versed when the ketamine was administered. There was no reason whatsoever to inject him, yet police directed the medic to do so anyway.

“I think his case is a very good example of the misuse of ketamine because, specifically, the paramedic said when she walked up that it was not excited delirium and that she was not going to give him ketamine,” said Anita Springsteen, an attorney who is representing Reycraft, according to KDVR.

“People in the United States should not be forcibly injected this way or given death sentences this way without due process,” said Springsteen.

We agree, however, in the land of the free, for refusing to show police your id, they will tackle you, strap you down, and then forcibly inject you with multiple sedatives, and they will refer to this torture as “due process.”