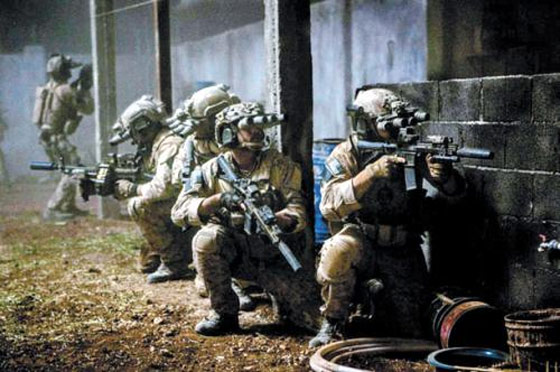 On March 1, the WSJ reported that the options contemplated by the White House in response to recent North Korean acts, include “the possibility of both military force and regime change to counter the country’s nuclear-weapons threat.” The review came amid recent events have strained regional stability including last month’s launch by North Korea of a ballistic missile into the Sea of Japan, and the assassination of the estranged half brother of North Korean leader Kim Jong Un in Malaysia.

And, according to a report in Yonhap, said “regime change” may come far sooner than expected: the South Korean website writes that U.S. special operations forces, including the unit that killed Osama Bin Laden, will take part in joint military drills in South Korea “to practice incapacitating North Korean leadership in the case of conflict”, a military official said Monday.

The U.S. Navy’s Special Warfare Development Group, better known as the SEAL Team 6, will arrive in South Korea for joint military drills and take part in an exercise simulating a precision North Korean incurion and “the removal of North Korean leader Kim Jong-un”, according to the Ministry of National Defense Monday.

The U.S. Navy SEAL Team Six will join the annual Foal Eagle and Key Resolve exercises between the two allies for the first time, along with the Army’s Rangers, Delta Force and Green Berets.

The counterterrorism unit is best known for its removal of Al-Qaeda leader Osama bin Laden in May 2011, known as Operation Neptune Spear. It will be the team’s first time participating in the annual Foal Eagle and Key Resolve exercises, which will run through late April.

As Korea JoongAng Daily adds, also set to touch down in South Korea is Delta Force, a special mission unit of the U.S. Army whose main tasks include hostage rescue and counterterrorism, said the Defense Ministry. Together with SEAL Team 6, they will practice removing Kim Jong-un and destruction of North Korea’s weapons of mass destruction.

“It will send a very strong message to North Korea, which is constantly carrying out military provocations,” a ministry official said.

“A bigger number of and more diverse U.S. special operation forces will take part in this year’s Foal Eagle and Key Resolve exercises to practice missions to infiltrate into the North, remove the North’s war command and demolition of its key military facilities,” a ministry official told Yonhap News Agency asking not to be named.

F-35 stealth fighters will also fly from U.S. Navy bases in Japan this month and carry out strike simulations on key North Korean facilities. A joint amphibious landing operation, which will kick off next month, will see the deployment of support ships the USS Bonhomme Richard, USS Green Bay and USS Ashland.

The beefing up of U.S. special operation forces in the drills comes after North Korean leader Kim said in a New Year’s speech that the country was in the “final stage” of test-firing an intercontinental ballistic missile, the first of its kind, and pushed through two separate missile tests earlier this year, the latest on March 6. North Korea claimed through its state-run media that the most recent drill was aimed at striking “the bases of the U.S. imperialist aggressor forces in Japan.”

Washington and Seoul stress that the annual military drills are purely defensive, although Pyongyang sees them as a rehearsal for an invasion. South Korea’s military said around 290,000 domestic soldiers and 10,000 U.S. soldiers will participate in this year’s drills, which by scale would be approximately the same as last year, the largest to date.

While the US may have decided to remove the element of surprise from a potential tactical strike inside North Korea in order to spook Kim Jong-Un, it is just as likely that by exposing their intentions, the US may have precipitated a response from the Korean leader which will make such a military operation inevitable, even as the geopolitical fallout for the region from such an action could be dire. As a reminder, last week an analysis by the Predata-Beyond Parallel strategic consultancy predicted that there is a 43% chance of North Korean WMD activity taking place in the next 14 days, rising to 62% in the next 30 days. Beyond Parallel defines WMD activity as nuclear tests and ballistic missile launches.