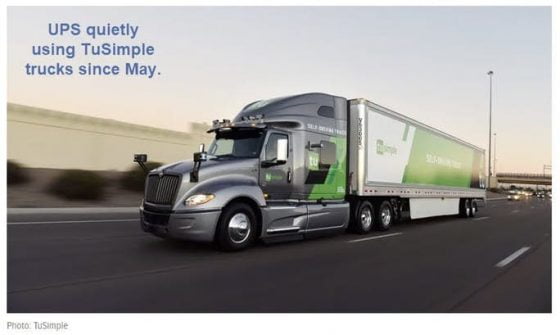 The United Postal Service has been using self-driving trucks to deliver cargo and no one knew about it. The self-driving freight truck startup TuSimple has been carrying mail across the state of Arizona since May in complete silence.

Artificial intelligence technology is advancing quickly, as evidence of the move toward self-driving trucks. According to Gizmodo, UPS announced on Thursday that its venture capital arm has made a minority investment in TuSimple. The announcement also revealed that since May TuSimple autonomous trucks have been hauling UPS loads on a 115-mile route between Phoenix and Tucson.

UPS confirmed to Gizmodo this is the first time UPS has announced it has been using TuSimple autonomous trucks to deliver packages in the state.

Around the same time as the UPS and TuSimple program began, the United States Postal Service and TuSimple publicized a two-week pilot program to deliver mail between Phoenix and Dallas, a 1,000-mile trip.

TuSimple claims it can cut the average cost of shipping in a tractor-trailer by 30 percent.-Gizmodo

Although details about the new partnership between UPS and TuSimple were not shared with Gizmodo, UPS Ventures managing partner, Todd Lewis, said the venture arm “collaborates with startups to explore new technologies and tailor them to help meet our specific needs.”

The partnership announcement states that TuSimple has been helping UPS understand how to get to Level 4 autonomous driving where a vehicle is fully autonomous and able to reach a particular location. At this point, the TuSimple trucks carrying packages for UPS still have an engineer and a safety driver riding along. When UPS reaches Level 4, it won’t need anyone behind the wheel. Gizmodo

The United States Postal Service (USPS) has also been testing self-driving trucks for mountain package deliveries. The agency has reported losses every year for the past 12 years. In 2018 alone, it reported a net loss of $3.9 billion and a $2.7 billion loss in 2017. Part of the agency’s plans to claw its way back to financial health is to invest in higher-tech solutions—autonomous vehicles ranking high on the USPS’s list.

These changes could save companies money in the long run, but what about all those truckers who will be suddenly unemployed? As of now, the advancements in technology don’t appear to be the problem.  The major problem standing in the way of autonomous driving vehicles is the government, but that could all change in a matter of years.

The economic impacts of having artificial intelligence replace human beings are obvious, but what about humanity’s inherent drive to be productive?  There are many unanswered questions when it sure seems like the AI takeover is right around the corner.