Update: No Evidence: Police Say Video Beating of White Man By Three Black Men Is Not A Hate Crime 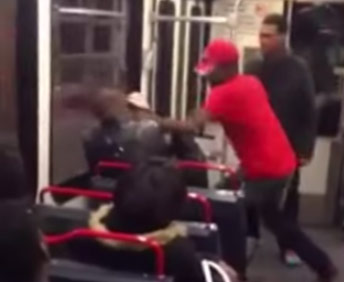 Earlier this week we asked whether or not the attack on a white man by three black men in St. Louis was just random violence or if it should be treated as a hate crime.

According to the victim of the attack a man approached him and asked what he thought about the Michael Brown shooting. When the victim replied that he was too tired to think about it the man and his friends beat him.

The question, of course, is whether or not this man was beaten because of the color of his skin or for some other reason.

Here’s the video if you haven’t seen it yet:

The St. Louis Circuit attorney responsible for determining what charges to file says no. Apparently there is not enough evidence to support a hate crime so one of the attackers, who has since been arrested and identified as 20-year old Ronald Williams, will only be charged with a misdemeanor assault. The primary attacker appears to be a juvenile and has also been arrested. Presumably he’ll be let off with minor charges as well.

Responding to questions, Chief Warrant Officer Ed Postawko explained why the city did not consider the attack a hate crime.

“We have to prove that the reason, the motivating factor for this specific crime, was not any of these other reasons, it was simply because of the factor of race or religion or national origin,” Postawko said.

“If in fact those kids did choose their victim because he was white, then there’s a legitimate question to ask whether or not hate crime enhancement is appropriate,” Aoresty said.

While some outright reject the basis of hate crime laws to begin with, noting that the motivation behind a crime does not change the crime itself, many others feel the law is selectively used in a politically correct fashion.

A “hate crime” by definition, is a crime of thinking a certain way when engaging in criminal activity such as an assault. And while we don’t necessarily support the idea of thought crime, the fact is that these laws are on the books and in a Constitutional Republic should be applied equally across the board.

There is, however, overwhelming evidence that “hate crimes” are only determined to be such when the victim is black. When the victim is white, officials often claim that there is a lack of evidence to prosecute under hate legislation.

If you’ve watched the video of the St. Louis incident then one thing should be clear: The victim was beaten for no other reason than the color of his skin.

Of course, we won’t see Attorney General Eric Holder or President Obama giving a press conference on the issue because, you know, racism only comes in one form – white on black. It’s just not possible that a black person could also be a racist.

In fact, some schools are teaching that only white males can engage in sexism and racism.

The passage at the center of this brewing controversy takes an inflexible position regarding which individuals are not allowed to be defined as sexists or racists. As it turns out, the textbook’s authors apparently believe anyone outside of white males are automatically innocent.

According to the book:

There is no such thing as reverse racism or reverse sexism (or the reverse of any form of oppression). While women can be just as prejudiced as men, women cannot be “just as sexist as men” because they do not hold political, economic, and institutional power. 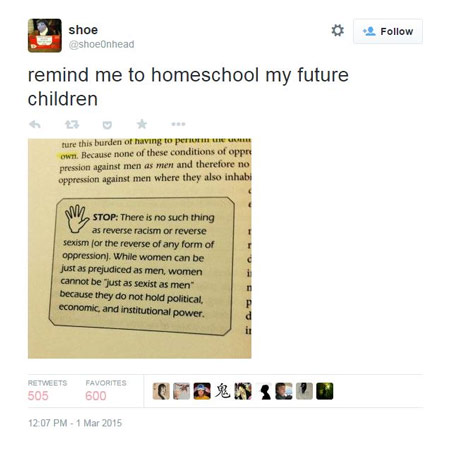 And there you have it.

This concludes today’s lesson on racism in America.