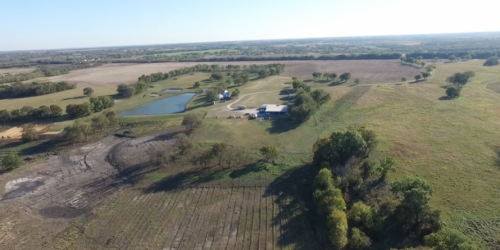 The developer of a high-end underground residential housing project advertised as a “five star playground with DEFCON 1 preparedness” is the subject of a federal criminal complaint after he agreed to launder money for Colombian drug cartels.

John Eckerd – owner and manager of the $330 million Trident Lakes condo project, along with an unnamed co-conspirator accepted money they thought to be the proceeds from the Colombian drug trade – but it was actually undercover FBI agents according to Dallas local station CBS 11.

The court documents allege Eckerd, 54, and an unidentified co-conspirator accepted $200,000 in purported drug money from undercover FBI agents over the past year. The federal sting culminated in February with Eckerd allegedly agreeing to launder $1 million from Colombian drug dealers through Trident Lakes, a planned 700-acre residential project in rural Fannin County.

An undercover FBI agent posing as a former narcotics trafficker learned of Eckerd last September when the unidentified co-conspirator, who lives in New Jersey, suggested that Eckerd’s development in rural Fannin County could be used to launder narcotics profits.

Eckerd, a McKinney resident, has been out on $100,000 bond since March. His attorney, Dallas defense lawyer Bob Webster, declined an on-camera interview, but questioned the charges against his client. –CBS 11

“As you know, the government, they can write in a variety of terms,” Webster told CBS 11 News. “And they choose the terms.”

A U.S. magistrate judge granted a continuance in the case in May, writing that “plea negotiations currently are in progress, and both the United States and the Defendant seek additional time to achieve successful resolution of these negotiations, which would render trial of this matter unnecessary.”

The Trident Lakes project made headlines two years ago while advertising the project – yet aside from building a horse-themed water fountain, neighbors say nearly nothing has been done on the property. It was to feature an 18-hole golf course and 796 subterranean condos fortified to withstand catastrophic events from nuclear war to the next global pandemic. Sizes range from 1,084 to 3,974 sqft. Prices for each unit ranged from $449,000 to $1.9 million according to a FAQ on the Trident Lakes website.

Everybody is attracted to our grand entrance. And by everybody, we mean this inquisitive cow. Moooooovehlous! https://t.co/vu93i7IiaJ pic.twitter.com/ky81Hqw1dQ

Trident Lakes is our vision of luxury living in a resort-style community with multiple layers of security. All residences are specially engineered, efficient and spacious earth-sheltered condominiums with oversized terraces. Integrated into the community is a variety of amenities including a gun-range, three Caribbean-style lagoons, horseback riding, walking trails, golf, tennis, clubhouse and more. From the front gate to the front door of your condominium, Trident Lakes has designed security and sustainable living into every detail. Trident Lakes delivers investment quality real estate for the sophisticated buyer who seeks pleasure and peace in a perilous world. –Trident Lakes

Each condo will be connected – via a series of tunnels – to a community center which will include areas for dry food storage, DNA vaults, exercise rooms, communal greenhouse and meeting areas. Because of our detail to planning and populating, Trident Lakes will be prepared to mitigate the dangers.

“We’re building more of an interactive, sustainable community, rather than just a hole in the ground to hide in,” the spokesperson said in that email. “Trident Lakes will be an above-ground country club resort with all the bells and whistles, but also — if need be — one of the safest places on Earth in our underground condominiums and communal living spaces.”

The doomsday getaway for the ultra-rich was featured in national and local media, including The Atlantic, Texas Monthly, Forbes, and Business Insider.

After the election of President Donald Trump in 2016, Americans took up new interest in doomsday preparations, as the possibility of a new Cold War set in. One company that manufactures and installs bunkers said it saw business climb over 500% in 2017. –Business Insider

Read the complaint below: