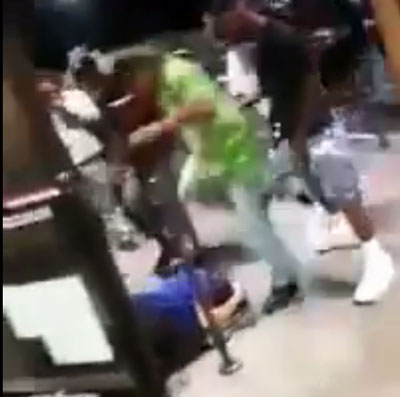 A new video shows up to one hundred teens engaging in a violent new activity called ‘Point Them Out, Knock Them Out’ wherein an individual is marked by the mob and then beaten to a pulp.

The teenagers playing the game are primarily black, while the victims shown in the video almost exclusively white, for the exception of a black security guard who risked bodily harm to save one of the fallen victims. A witness account indicates that there was at least one additional black victim, though this was unclear in the video.

In the uncensored video below, teens are shown rushing a Kroger’s grocery store in Memphis, Tennessee where they target a white employee.

What happens next is nothing short of a mass hate crime, as the individuals proceed to knock the employee down, throw pumpkins on him and then stomp his head repeatedly.

What’s most appalling and shocking is that the individuals, as well as the person making the video, seem to find the game to be nothing out of the ordinary. The videographer actually laughs from excitement when she realizes that a white individual has been targeted. Once that person is taken down by the mob, they set their sights on another, and then another.

All these motherf*ckin kids… All these hood rats.

They got a white dude… haha… hold on.

[A second white individual, a Kroger employee is then targeted at front door]

“Is that an exaggeration?” asked WREG’s Elise Preston.

“No, it`s not an exaggeration,” replied the witness.

There were so many kids, the security guards couldn’t control the violent crowd.

“They were playing a game called ‘point them out, knock them out.’ Where they would point someone out and attempt to knock them out or fight them. There was no real reason behind it. (Via News Channel 3)

In the aftermath of the Ferguson police shooting incident, where a black teen was shot by a white police officer, thousands of people protested the action as a racist hate crime. Though no evidence of the crime has been presented and the exact circumstances that led to the shooting remain unclear, African American community leaders and representatives of the Obama administration, including Attorney General Eric Holder, descended on the area. Their aim was to seek justice and to support a community that has reportedly been discriminated against based on their race.

Will there be a similar outcry in Memphis? Or is the definition of a ‘hate crime’ one that applies only to ‘white-on-black’ or ‘straight-on-gay’ violence?

Such brazen attacks will not only continue, but will get progressively worse if those responsible are not held to account, and that includes everyone who organized and was involved in the Memphis mob.

What do you think? Was this a hate crime targeting white individuals (and perhaps black people who were helping whites)? Or are these teens simply acting out and rebelling like any kids their age would do?

Moreover, had the mob been made up primarily of white teens attacking black teens, would the response from law enforcement and government be any different?