U.S. Economy: A Gigantic Bubble With Trump As “The Greatest Salesman” 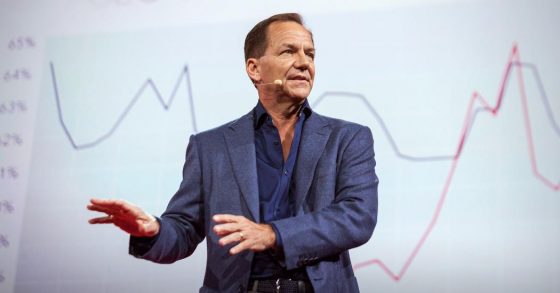 Billionaire Paul Tudor Jones warned yesterday that a combination of president Donald Trump’s massive government spending and ultra low-interest rates could create a “heady brew.”  And once that bubble bursts, it’ll be chaos.

At a wide-ranging discussion at the Greenwich Economic Forum with billionaire hedge fund chief Ray Dalio, Jones called the current combination of fiscal and monetary policy “the most stimulative it’s ever been.” Both men have become vocal advocates for the idea that growing inequality is fueling a populist backlash. –Yahoo

“It’s literally the most conducive environment for economic growth and strength that I’ve ever seen,” Jones said. But he noted that low rates and high government spending are also fueling political polarization and a widening wealth gap. It’s going to be difficult to “make America great again” if the everything bubble pops.

The Fed Created The Everything Bubble And A Liquidity Crisis – What Happens Next?

It’s been said that Trump is attempting to get the interest rates low so he can tackle the national debt.  But if that’s true, why is he continuing with the terrifying spending spree while claiming the economy is the best it’s ever been?  That simply doesn’t make sense when logic is applied. If you wanted to pay off your credit card, you may ask for a lower interest rate, but you’d also stop spending money you don’t have.

Jones said this is the very problem.  Neither political party is willing to tackle the problem of government spending. President Donald Trump “is the greatest salesman in the history of this country,” Jones said, noting that the president persuaded the Republican Party to embrace a massive deficit as “a reasonable proposition and [an example of] good government policy.” According to Yahoo, Jones was also critical of the Federal Reserve, which just last week cut benchmark rates in the face of a slowdown. Combined with soaring public spending, Jones called U.S. public policy “a heady economic brew we’re all consuming.”

Morgan Stanley: The Fed’s Interest Rate Cut Will NOT Stop A Recession

Jones’s $8 billion macro firm recently warned that the potential election of Democrat Elizabeth Warren could trigger a 25% correction in the stock market. On that score, he predicted the S&P 500 would likely tumble from current levels if either of the leading Democrats were elected, given their embrace of Communist-style high taxes.

While Trump may be the “lesser of two evils” when it comes to the economy, he’s still not making any attempt to fix the problems that have been embedded in the government’s policies for over a century.